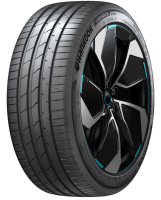 Hankook are one of the tyre manufacturers leading the charge developing specific ranges of EV (electric vehicle) tyres, with the culmination of their work being the new iON range.

As you would expect, the new iON range of EV specific tyres focus on less energy usage, enabling the driver to go further on a single charge, lower noise levels, with Hankooks sound absorber material inside the tyre, all while keeping excellent performances in the dry and wet.

The new Hankook Ventus iON S and SX (for SUVs) covers the summer range and is available to buy now, with the winter Hankook Winter i*cept iON due later this year. There is also an all season tyre specifically for North America, more on that in the near future.

At time of writing there has been no chance to test the new iON tyre, so instead you can read the press release below, and keep an eye on the site for when Tyre Reviews gets chance to get the new range of tyres.

In May 2022, premium tyre manufacturer Hankook launched the Ventus iON S, the first summer tyre in a new product range that has been specifically designed for electric vehicles. By taking this approach, the company wants to make a decisive contribution from a tyre choice perspective to advancing the mobility transition towards zero-emission vehicles. The new summer tyre is a pioneer of the new, global “iON” tyre family designed for premium electric vehicles, which will include the Hankook Winter i*cept iON in September 2022. 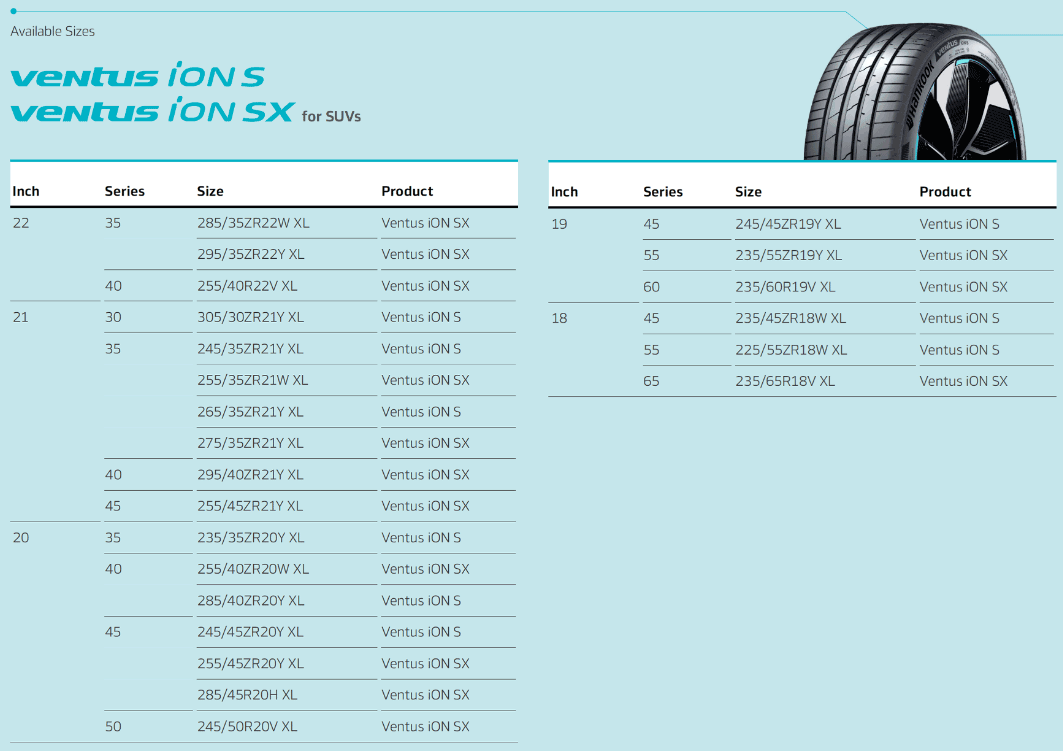 The new Hankook Ventus iON S meets the demanding everyday requirements for EV tyres (EV = Electric Vehicle) by providing an extensive set of technical measures. In particular, Hankook has countered the higher vehicle mass of electric vehicles – caused by the considerable weight of the drive batteries – with a higher load capacity. Among other things, ultra-resistant aramid fibres effectively counteract the deformation forces caused by the especially high torque in electric vehicles. The tread compound, which features a high proportion of natural resin, also ensures exemplary durability and reduced wear. The high silica content provides micro-level grip on wet roads by counteracting the formation of a film of water between the road surface and the tyres, which can be dangerous. Another special feature of the new compound is its high proportion of natural oils. This not only makes the iON products more sustainable overall, but it also has a positive impact on the durability of the tread. This means that less material is required for consistent performance, and the savings in weight of up to one kilogram per tyre improves rolling resistance.

One of the special features of the Ventus iON S is the aerodynamic optimisation so that it can exploit potential for greater levels of efficiency and range. The tyre pattern is designed in such a way that air resistance is reduced, something that is even true for the lettering on the tyre sidewalls.

A further development goal was to achieve the quietest possible running characteristics, especially since eliminating the noise of an internal combustion engine draws attention to this aspect. It is therefore all the more important that Hankook’s integrated Sound Absorber™ technology, together with the noise-reducing tyre pattern, noticeably reduces the level of noise inside the vehicle.

Hankook engineers have brilliantly resolved the conflicting objectives of minimising rolling resistance while maintaining the same quality in other important performance criteria. This has also been certified by TÜV SÜD in an independent comparative test using competitor products from the premium segment. Mounted on common premium electric vehicles, the Hankook Ventus iON S is clearly superior, without showing weakness in other important criteria.

It also achieves the best values for wet and dry braking performance. Furthermore, it is also the quietest tyre in the test.

Special tyres for electric vehicles are also becoming increasingly important in the replacement business. According to forecasts by the information service IHS Markit, the global share of battery-powered electric automobiles in total vehicle sales will increase by 36.6% annually, from the current 6.4% market share to 29.5% by 2028. Because Hankook iON tyres make it possible to drive more kilometres per battery charge compared to standard tyres, they can also make a significant contribution to reducing CO2 emissions from road traffic.

Sanghoon Lee, President of Hankook Tire Europe: “With the introduction of the Ventus iON S as the first tyre in a new range, our company is increasingly taking into account the rapidly growing demand for electric vehicles and the associated need for suitable tyres, also in terms of the need for replacements. With an improved range per battery charge, this new generation of tyres will help to further optimise the efficiency of electric vehicles in everyday use. We are pleased to say that this has already been confirmed by independent institutions.”

Klaus Krause, Head of the Hankook Tire Europe Technical Center in Hanover: “We are particularly proud that the new Hankook Ventus iON S, for example, has achieved an A/A/A rating on the EU tyre label. This corresponds to the highest performance levels in terms of rolling resistance, wet grip and tyre noise.”

As one of the world's leading original equipment manufacturers of electric vehicles from premium car brands, the Hankook development engineers have already documented their expertise in this demanding segment many times over. Original equipment tyres from Hankook that have been optimised for electromobility are already being used by Audi, BMW, Porsche, VW and other leading brands. From the 2022/2023 season, the premium tyre manufacturer will also be demonstrating the technical expertise it has acquired in the area of sustainability and high-performance mobility, as a supplier in the world of electric motorsport, as appointed by the Fédération Internationale de l’Automobile (FIA).