The most criticsied aspect of runflat tyres is comfort, which is why Bridgestone have taken a fresh approach to the runflat tyre with the new Bridgestone DriveGuard. The new tyre promises improved comfort, noise, wet grip and reduced tramlining. Have Bridgestone solved the runflat problem with a fresh approach to the only type of tyre which can keep you mobile regardless of the type of puncture? We've driven on them to find out!

Runflat tyres allow you to drive for up to 50 miles at 50 mph once your tyre has been deflated, and unlike seal tyres which only protect small punctures in the main tread, they can keep you mobile in almost any type of deflation situation. In order to achieve this, runflat tyres have a strengthened sidewall which adds weight and stiffness to the structure, and is the cause of many of the negative qualities associated with runflat tyres.

The new Bridgestone DriveGuard has a completely re-imagined and re-engineered sidewall structure, which now has a far more "traditional tyre" level of compliance in the material, but is still sturdy enough to drive safely on in the event of a puncture. 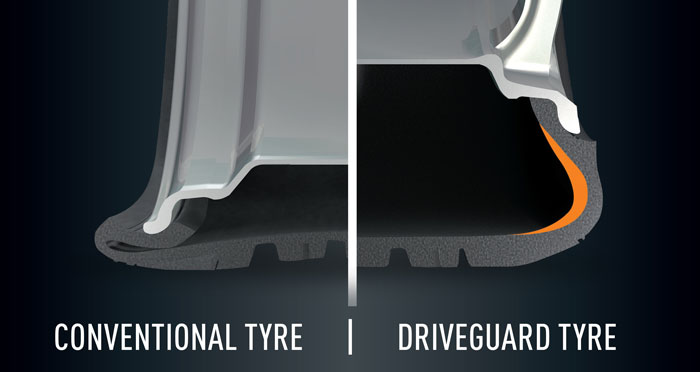 The new DriveGuard has achieve an A for wet grip and C for fuel economy, bettering Bridgestone's current non-runflat offering and equalling some of the best touring tyres available.

Other benefits of the DriveGuard are availability and pricing. Unlike current runflats, which are all OE marked, the DriveGuard can be fitted to any car with a TPMS system, which just so happens to have been an EU mandatory requirement for all new cars since 2014. The DriveGuard is also priced under a traditional runflat, with the recommended pricing sitting between a normal tyre and a runflat.

The route consisted of 10 km each way of mixed driving, over extremely varied road surfaces. In order to test the DriveGuard in isolation, we spent the first part of the journey on the new tyre.

In isolation, it would be easy to mistake the DriveGuard for a normal tyre. The ride was compliant, the steering feel good, grip impressive and noise low. In the 205/55 R16 size fitted to the 308, there was no notable tramlining and the only hint of the DriveGuard being a non-standard tyre was the way the tyre transmitted big road imperfections such as potholes into the suspension of the car.

For the second part of the journey we changed to the regular Turanza T001. The difference in general driving was extremely small, arguably unnoticable to untrained drivers, and only offering a small amount of improvement over the DriveGuard in the high impact pothole type hits. If anything, the car had lost a little steering feel, without a noticeable improvement in comfort.

To further demonstrate the DriveGuard advantage, for the third section of driving we purposively punctured the apex area between the tread and the shoulder, and let the tyre deflate. We chose to damage the apex area as it is the area a "seal" technology tyre can't protect against.

Driving on the deflated tyre was immediately noticeable due to slower steering input on the deflated side, and an increased noise, but the car was no way uncontrollable, and still offered excellent braking and steering control at sub 50 mph speeds. It performed flawlessly as a runflat tyre.

While our own experiences on the new tyres were all too brief, Bridgestone commissioned the world's leading independent test body TÜV SÜD to benchmark the new DriveGuard against three of the leading non-runflat competitors. Selected for the testing was the multi test winning Goodyear EfficientGrip Performance, Michelin Primacy 3 and Pirelli Cinturato P7, a brave selection given the performance of these tyres in magazine tests.

Fortunately, the new DriveGuard performed incredibly. When averaging the results of the three competing tyres, the DriveGuard scored 104% of the group in straight aquaplaning, 118% in curved, 106% in lateral wet grip, equalled the group in wet braking and scored 102% in dry braking. Even more surprising was the comfort and drive by scores, with the runflat DriveGuard scoring 99% during comfort testing and 101% under drive by noise when compared to three of the best non-runflat tyres on the market!

The only drawback of the new tyre is rolling resistance, where the DriveGuard scored 95% of the groups average. This is a natural drawback of a runflat tyre sidewall construction, but is an improvement over existing tyres.

Now the runflat can be fitted to any vehicle with TPMS, should you consider it?

If your car doesn't have a spare tyre, and you're worried about being stranded, the DriveGuard is an excellent solution. The new technology runflat offers a near identical blend of performance to traditional non-runflat tyres, with none of the traditional drawbacks of the early runflat models.

The DriveGuard is a huge step forward for Bridgestone.