David takes a look at what the new Dunlop Winter Response 2s are like to live with every day.

I first ran cold weather tyres in the winter of 2010/2011, and documented my experiences for tyrereviews.co.uk back then. Why do I say "cold weather" tyres? Because the Central European winter tyres that are suited to UK conditions offer improvement in cold, damp, wet and greasy conditions - i.e. even if there ISN'T snow. And of course they are far superior to summer tyres (the sort that most people run year-round) when the white stuff does come - but just because of that they shouldn't be mis-categorised as "snow" (only) tyres, as many people think of them; they're beneficial from roughly October/November to March/April, depending on local weather and running conditions.

I've continued the now very natural ritual of swapping to winter tyres (and back) every year since then. However, there was a sting in the tail at the end of last winter - or, rather, a nail in the tyre! Since I still had plenty of tread left I was left pondering what to do - get it repaired, or replace 1, 2 or 4 tyres.

I was quite literally checking out my options when Jon from Tyre Reviews emailed me to say that Dunlop had just released their new Winter Response 2 tyre - would I be interested in writing a long term review of them? The tyres were available in my size and so my dilemma was now nicely solved!

Every time the weather starts to change I find myself obsessing over the temperature and longer forecasts as to when to switch over. 7 degrees C is the most quoted time to switch, and indeed I found in my own experience that at 6 degrees and below winter tyres do indeed offer a tangible improvement. In that first year of running I also discovered an "upper limit" - up to 10 degrees was still acceptable, but at 11 degrees C and above winter tyres started to perform noticeably poorer, particularly in dry braking and steering. (That said, if you can only afford to run one set of tyres, running winter tyres year-round is the recommended way of doing it, since you're less compromised with winter tyres in warmer weather than you are with summer tyres in the cold. But in general, running two sets is the safest and most economical long-term practice.)

This year (2013), in my area and under our usual driving conditions, I estimated the beginning of the switch-over point was on 18th November, and the other car in the family did indeed have its winters put back on then. The 20th saw a brief sleet and snow shower where we are, so I'd judged it perfectly.

My own tyres were fitted on the 29th November, still within the cross-over window and ahead of another predicted cold snap - but this one colder and possibly due to last all winter. The reason for the delay was that Dunlop had to source my tyres from Europe since all UK stock was gone by then - another reason to buy early rather than waiting for the first snow.

I had the Winter Response 2s fitted at my nearest friendly HiQ centre. My summer tyres were removed and the winter tyres mounted on the same rims while I sat in the warm waiting area. The whole process took less than an hour.

The latest and greatest 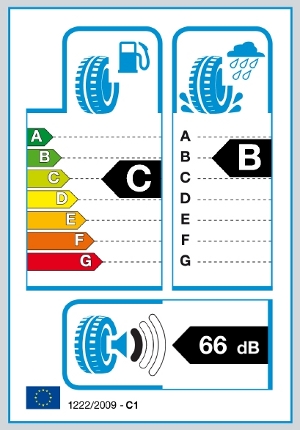 Tyres, as with all technology, are constantly changing and improving. The year after I bought my original Ultragrip 7+ winter tyres Goodyear introduced the Ultragrip 8, and since then all the other major manufacturers have replaced their own models.

Dunlop have been one of the last companies to refresh their offering in my size, so I was quite literally getting the cutting edge. The EU tyre label ratings reflected this - a 'B' for wet braking is the best I was aware of, and an external noise of 66 dB likewise. A fuel rating of 'C' is also among the lowest.

Tyre label values are one thing though, and sometimes real world testing can reveal another side to the coin. However, two second places in the European tyre comparisons that the Winter Response 2 had appeared in so far indicated that in wider and independent testing, Dunlop's new entry matched its promise.

My first impressions of the Winter Response 2s was that they felt very "summer-like"! The tyres felt good from the go, and there was only an incredibly brief delay between steering or braking and the response taking effect, which you'd only likely notice if you were looking or expecting it. The tyres also felt very "planted," indeed more so than the summer touring tyres I am currently running. Dry braking was also very good. Indeed, I'd be hard-pressed to tell these winter tyres from summer tyres if I was unaware of which I was running.

What was a surprise though were the "driving comfort" aspects of the Winter Response 2. Normally with modern winter tyres you expect a softer and quieter ride, and indeed my old Ultragrip 7+s were the highest example of that. In comparison the Winter Response 2s were much more summer-like in their ride, nearer to (but a little bit quieter than) my summer tourers, but harsher over bumps and potholes. (I double-checked my tyre pressures and they were fine.) Interestingly the two European tests both marked the Winter Response 2 down for internal noise - although EXTERNAL noise was better, which is actually what the EU label rates. In any case, the Dunlops aren't unbearable, and if you'd never driven on (other) winter tyres before then you'd not expect any different.

Indeed, the fact that the Winter Response 2s behaved so much like summer tyres at these initial non-optimal (7-10 degrees) conditions speaks well for their target market of 14 and 15 inch vehicle owners, who would likely be after a winter equivalent to their summer tyres in behaviour. 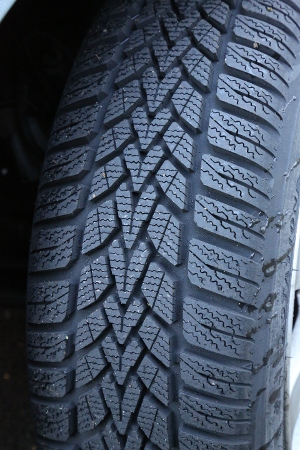 When I first ran winter tyres I speculated that the extra grip that the winter tyres were offering over the almost identical tread pattern that my then summer tyres had was due to the sipes - the wiggly patterns cut into the tread blocks. Dunlop's press material for the Winter Response 2s confirmed this theory, stating "High-density sipes mean more biting edges for improved wet weather braking and handling, as well as better traction on snow and ice."

My first experience of the Winter Response 2s in wet conditions was on the stormy day of 5th December, so it wasn't just rain they had to contend with but wind as well. The new Dunlops completely exceeded my expectations; were it not for the occasional "krsssh" as I hit a patch of deeper water, then I really wouldn't have known I was driving in the wet (well, spray and windscreen wipers aside...). The planted nature I'd encountered in previous running in the dry also meant my car, normally quite susceptible to the wind, was now barely affected by it, even at dual-carriageway speeds. At one point I was following a lorry through a tree-lined two way section of road. Rain was falling, spray being kicked up and leaves being blown about, yet everything felt calm and controlled and completely serene.

Forget "winter" tyres, forget even "cold weather" tyres - the Dunlop Winter Response 2 are the best "AUTUMN" tyres I've ever driven! And the fact that they've coped so well in warmer (7-10 degrees C) conditions means I will no longer have any hesitation about putting these particular winter tyres on sooner rather than later in the year.

Unfortunately, by the time this initial report had to go to press, the lowest temperature I had run the Winter Response 2s in was 6 degrees C. However, I don't expect any deficiencies in more wintry conditions, firstly because ANY winter tyre will out-perform a summer tyre in the cold and snow and ice, and secondly because the Winter Response 2 has achieved good marks in the snow in both of the European tests it has appeared in.

I'll be writing a concluding report in the spring once I take the tyres off. But based on what I know about the tyres so far I can definitely say that they're very suited to the British climate; a real revelation and pleasure to drive.

Update: Part 2 of Davids review can be found here!