David updates us after his Dunlop Winter Response 2s come off.

Part 1 of my long term review of the Winter Response 2 outlined the benefits of running winter tyres, together with my initial impressions of these new Dunlops.

The intention with this current article was to write a concluding report based on my running over the winter period. Unfortunately the initially forecasted prolonged snow never came, and instead we had the wettest winter on record (during which the tyres coped admirably, I may add).

That said, I did gain some additional insights into the Winter Response 2, which I will share below. 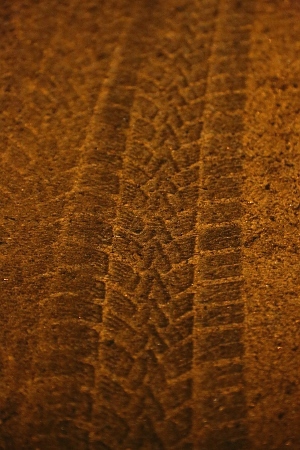 Snow never came for me this year, but temperatures did drop into the 7 degrees C and below range where winter tyres are generally recommended as being beneficial.

Between 4 and 2 degrees when driving in the fog the Winter Response 2s seemed to be quieter and less harsh. At zero degrees in the frost on the 29th December things felt no different to driving in the warm and dry on summer tyres. Indeed it wasn't until I got out of my car to photograph the tyre tracks seen on the right that I was reminded how slippery it actually was, with my feet sliding about as I tried to take photos.

My experience of previous winter tyres was that they'd be acceptable up to 10 degrees C, but as temperatures went above that braking became progressively longer and steering increasingly delayed. The Winter Response 2 re-wrote that rule of thumb that I've historically used to judge change-overs to winters and back. I found that they were still perfectly acceptable up to 13 degrees, i.e. there was no real difference in feel to summer tyres. Only at 14-15 degrees did braking begin to get longer and understeer begin to surface - as it had at 11-12 degrees on my previous Goodyear Ultragrip 7+s - while 17 degrees on the new Dunlops felt like 14-15 degrees on my old Ultragrips. In other words they were a step better than previous winter tyres as temperatures went up. (This was cross-referenced against the other car in the family also running an older generation winter tyre, so it's not that my recollections have changed.)

Apart from being a significant leap in winter tyre performance in the warm, what this also means is that you can put the Winter Response 2s on earlier in the autumn and leave them on later into the spring, knowing that they'll see you through cold mornings or evenings but still be fine if you also do running during the warmer middle part of the day.

Fuel economy is something that's ironically been hard for me to quantify, since my driving has changed considerably of late, consisting of a lot more very short runs than in the past.

A long term trip counter on the Dunlops recorded 37.1 MPG of mostly (very) short local running. This was almost identical to what my eco summer tourers managed (37.2) in the same sort of running when I switched back to them at similar temperatures. Likewise more representative "urban" running returned 38.7 MPG on the Dunlops compared to an again almost-identical 38.6 on my summers. My car's official urban figure is 38.7, but while that may seem spot-on my old Ultragrips would get as high as 40-41 MPG.

In longer runs, including motorway and dual-carriage way, I managed 45.2 MPG on the Dunlops, while a fixed loop that includes different gradings of speed limits gave 54.0 MPG on the Dunlops compared to 57.5 on my summer tyres. My old Ultragrips in comparison were slightly worse here, clocking in at 52.9 MPG.

Both my old winters and current summer tyres are rated "E" for fuel economy, whereas the Winter Response 2 has a (better) rating of C. Sadly, as with a supposedly low noise rating, I found that the expectations given by the new EU tyre labels for these disciplines were not necessarily matched in practise, and should therefore only be considered as a rough guide. It's something group tests noted when the labels were first introduced, and other people have remarked upon it too so it's not just me. Again, the best source for "real world" experiences are user review sites such as TyreReviews.co.uk, where you can also find summaries of independent industry group tests.

I'd like to emphasis that there's nothing particularly poor about the Winter Response 2's economy figures, and they're not that noisy either. It's just that after my old Ultragrips and the published EU ratings I'd had higher hopes. I should also remark that the driving dynamics of the Dunlops have completely exceeded my expectations, and for many safety and performance will far outweigh concerns about fuel economy and comfort. 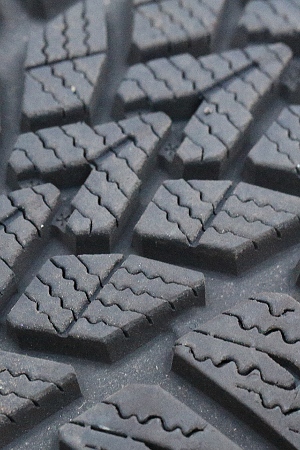 I mentioned in Part 1 that I felt the Winter Response 2s gave a bit of a harsh ride, which had been a surprise after the super-soft comfort of my old Ultragrips. That impression remained, although I will add that the Dunlops coped well with the ever-growing number of potholes on British roads. You definitely felt them, but the tyres themselves remained unscathed.

Unfortunately another thing I did find lacking was rim protectors, despite my relatively low profile ratio (55), and I managed to scrape an alloy parking next to a high kerb. My fault of course, but something rim protectors could have helped prevent.

Tread depth was approx. 9mm when new and was down to approx. 8mm after one winter of use. To the right you can see the overall tread wear (8mm left), winter tread marker in the centre (4mm), and legal tread limit marker (1.6mm) towards the bottom. It's recommended (and, in some countries, a legal requirement) not to run winter tyres below 4mm of tread. More relevant for the UK is that below 4mm tyres also become increasingly more prone to aquaplaning, so the snow marker also allows you to gauge that too.

Switching back to summers

Once back on my summer tyres they immediately felt better under braking in the warmer weather, as well as more planted in those conditions. My summers did feel slower to steer; the Dunlops definitely had a much sharper steering response in their own running conditions. Comfort was better on my summer tyres - probably my biggest criticism of the Winter Response 2s. A similar transformation was felt on the other car in the family after its transition back to summer tyres.

A final useful experience was had when encountering conditions at 3 degrees when back on my summer tyres towards the end of March. My summer tyres felt very hard and "tall," not grounded and gripping like the Dunlops had in cool running.  In contrast to summer tyres, winter tyres "key in" to the road surface at colder temperatures, and this was exactly what I was feeling (or not) on the two different tyre types.

I'd hoped that given its summer-like driving experience in autumnal and spring conditions I would be able to recommend the Winter Response 2 as an "all-season" tyre. However, even with their wider operating window compared to previous generations of winter tyres they still haven't completely removed the engineering trade-offs, and I would still recommend running two sets of tyres to maximise performance, safety and tyre wear.

The new Dunlop Winter Response 2 has been exceptional in all conditions I've run it in so far, with its capabilities above 10 degrees C being a particularly welcomed improvement to previous generation winter tyres.

Snow use is the one area where I've not yet had experience of the Winter Response 2 myself, but group tests published so far have rated it highly. However, even without any snow these tyres have proved their worth in the sort of conditions British winters otherwise typically throw at us.

When switching my tyres over I'm always pleased to experience the increased performance that running the right rubber for the weather brings. The Dunlop Winter Response 2s are a very welcomed addition to my garage and I'll definitely be looking forward to putting them back on again in the autumn.