The new Michelin Pilot Road 4 is here, and it’s good.

Replacing the Michelin Pilot Road 3 was never going to be an easy task. Michelin were the first (and are still the only) manufacturer to use sipes, small cuts in the rubber which help in wet conditions, in motorbike tyres. While the Pilot Road 3 was an excellent all round tyre, and the sipes made it class leading in the wet, it did seem to wear fairly quickly for a Michelin bike tyre, and had the odd stability issue.

Fortunately for the Pilot Road 4, Michelin have worked on several new technologies to improve any weaknesses in the out going tyre. The tyre continues to use 2CT (two compound technology) to offer softer shoulders than the centre section, offering improved cornering grip and wear, and XST+, an improved version of the sipes used in the Pilot Road 3 keep the wet performance class leading. The biggest change to the new Pilot Road 4 is the new "Michelin 2 AT technology", which is the result of a 5 year development project to combine the advantages of bias tyres (high load carrying and stability) with the benefit of radial construction (enhanced riding pleasure and comfort.)

All these changes make a difference. The new Pilot Road 4 improves the longevity by 20% over the Pilot Road 3, while still keeping the huge gap in wet braking compared to its nearest rivals. A 17% average lead on low grip wet roads (think painted white lines.) 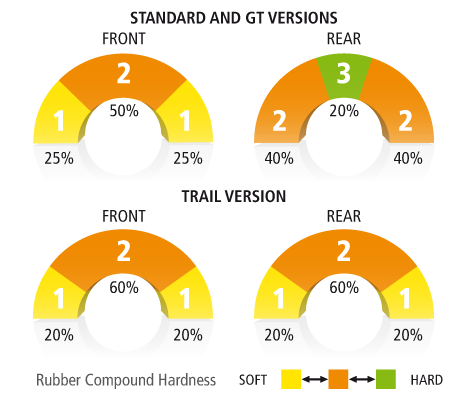 New to the Pilot Road 4 are different versions of the tyre. While the basic tread pattern is the same, the tyre comes in a standard, GT and Trail version. The GT version is OE on the BMW R 1200 RT, and has a stiffer construction for the heavier bikes, while the trail version has a softer rear compound, to offer improved grip in extreme conditions.

This utilises the new 2AT carcass to its maximum, allowing it to perform across all types of bikes.

As part of the launch, Michelin offered us a variety of bikes, from the light and nimble ER6 to the big and heavy BMW tourers.

During a 200km road ride with plenty of bike swaps, tyre performed flawlessly. Warm up was never an issue, damp sections of road seemed to have no effect on the available grip, and the stability, even on the big and heavy bikes, was impressive.

Also part of the launch involved wet and dry track testing. On a wet low grip painted surface, the Michelin Pilot Road 4 had a huge advantage in both braking distance and braking stability over a Metzeler tyre on identical bikes, with the Michelin stopping on average 10 metres shorter from 60kph.

During dry handling the Pilot Road 4s were pushed to the extreme, and watching a 100bhp+, 270kg BMW R 1200 RT almost scrape the panniers on track was proof enough the tyre offered enough grip for any sports touring road riding.

The Pilot Road 4 has managed to move the game on, further extending the lead Michelin have in the sports touring segment. While the tyre probably isn’t suited to a hypersport bike such has the S1000RR, the vast range of bikes on which the tyre works highlights the excellent balance Michelin have found with this tyre. Thoroughly recommended. Plus, the tread pattern is cool.