If you've owned a motorbike in the past 16 years, chances are you'll have been recommended the Michelin Pilot Road range of sports touring tyres. Launched in 2002, the Pilot Road has been category defining with almost every update, and is famed for having the best blend of wet grip and longevity in its class.

In 2018 Michelin have launched the update to the Pilot Road 4, and they've dropped the "Pilot". The new tyre, the Michelin Road 5, promises to extend Michelins dominance of the sector by further improving dry grip, stability, wet grip, and performance over the tread life. 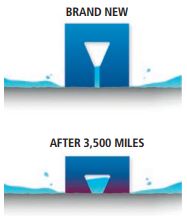 Sports touring riders are a difficult bunch of people to please. They use their bikes daily, or over great distances so they want a comfortable, stable tyre which wears well, but they don't want to compromise on feel, handling and ultimate dry and wet performance for when they get to that beautiful country road that's begging to be attacked. In short, a good sports touring tyre has to do EVERYTHING well, which makes the development process incredibly difficult.

Luckily, Michelin know a thing or two about motorbike tyres, and spend a lot of money on research programs such as Moto GP in order to push their engineers to break new ground. With the Road 5, they believe they've done just that.

While all the headline numbers are impressive, there are three statistics that particularly stand out:

That's right, a sports touring tyre which can stop better than the previous best in category when 3,000 miles old, and is faster than a super sport tyre! 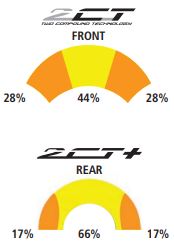 While full details of the technology improvements can be found in the press release here, the key to the new Road 5s impressive performances comes down to three key features.

The first is a cutting edge adaptive tread compound, which widens as the tyre wears, allowing more water out of the tyre when worn. This is only possible now with "metal additive manufacturing", or as the rest of the world call it "3D Printing", which allows for much finer details on the tyre moulds.

The tread compounds have also been updated, with the centre silica section of the front tyre offering improved wear while retaining the excellent wet performance, and the rear tyre has a near all carbon black compound on the shoulders for excellent dry weather grip when the bike is fully leant over.

The carcass also has the latest ACT+ technology, which allows the tyre to offer varying levels of stiffness based on load and lean angle. This means the tyre can be comfortable while upright, and agile and responsive when leaning into corners.

So how does this translate onto the road. To find out, I was lucky enough to test a huge variety of bikes on the track and road, in Seville, Spain.

Sadly at the Circuito Monteblanco there was no comparison tyre available, but the Road 5 performed flawlessly in every text. Riding on bikes such as the Ducati Supersport, Triumph Street Triple and BMW XR1000R I was able to put the tyre through dry and wet handling and braking tests. It was hard to judge outright performance without another tyre on the same bike and track, but each tyre and bike combination was reactive and nice to turn, all while being incredibly stable on the faster bumpy corners.

The road manners of the tyre were equally as impressive. Across a 150 km ride through the Spanish mountains I didn't once have cause for concern on any of the three bikes (Triumph Speed Triple R, BMW r90, Honda CB650), with each bike dropping in nicely, super stable over the rough surfaces, and having a seemingly endless supply of grip.

This tyre is everything you want in a sports touring tyre. The only question left unanswered is durability, but Michelin are experts in long lasting tread compound, and the Road 5 has been optimsed to avoid the problem heavier bikes saw with the rear of the Pilot Road 4 squaring off quite aggressively.

If this tyre doesn't score extremely well in the magazine group tyre tests this year, the rival manufacturers will have performed nothing short of miracles.