The CrossClimate started life as a summer tyre, and was gifted winter abilities. While this means it isn't quite as good as traditional all season tyres in extreme winter conditions, it is still more than enough for anything the UK winter has to offer, all while retaining the dry and wet performance of a dedicated summer tyre.

So, with the multiple award winning CrossClimate being updated, what does the new tyre bring? Visually, the only change for the CrossClimate+ is the addition of the + on the sidewall, so we've spoken to Michelin UK to find out exactly what's new on the inside!

What is the main change in the new CrossClimate+?

The main change is the new latest/greatest tread compound. Thanks to the new compound, the CrossClimate+ delivers more mileage, so even bigger gap now to All Season competitors, and Michelin's other summer range. It's a new version of the same compound family, and this version works well in multiple geographic zones. 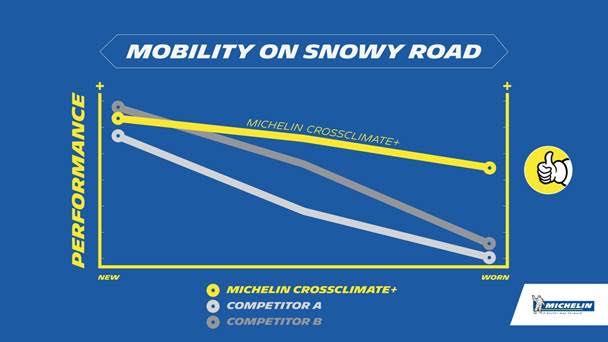 What else has changed?

We have significantly reduced drop off new to worn, meaning the tyre retains its dry, wet and snow performance throughout the treadlife.

Are there any drawbacks to the new CrossClimate+?

While dry braking performance is identical to the CrossClimate, wet braking has gone from lower part of A of the EU label, over the boundary to upper part of B, hence change looks greater than it is.

It is only a slight drop in wet braking performance in certain sizes, but we've a large gain in other areas. It's still amongst the top end of the summer ranges as a 'B', only about a third of premium summer tyres offer 'A', and I think considering all the other benefits the CrossClimate+ brings, it's worth it.

Still not convinced the CrossClimate is the right tyre for you?