The Yokohama Advan A10 is a High Performance Summer tyre designed to be fitted to Passenger Cars. 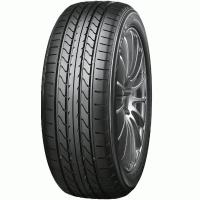 The Advan A10 is ranked 144th of 192 Summer High Performance tyres.

Sorry, we don't currently have any magazine tyre tests for the Yokohama Advan A10

Given 44% while driving a Mitsubishi (225/45 R17) on mostly country roads for 10,000 spirited miles
Had these on my Mitsubishi Lancer Ralliart. The sidewalls cracked on all 4 tyres after only 10000 miles. Had an MOT advisory on them, that was it.. Threw them away with around 4 mm of tread and fitted Kumho Ecsta's, what a difference, far superior tyre. Never again would I buy Yokohamas, beware sidewall cracking, since then I have heard of other people suffering the same problem.
Helpful 18 - tyre reviewed on March 7, 2014
Given 69% while driving a Lexus GS450h (225/45 R17) on a combination of roads for 30,000 average miles
This is a standard tires on my Lexus but I found it not really matching the character of this type of vechicle. Perhaps if I'm in early 20s then might consider about it, but at meantime I'll better stick to something softer and quieter.
Helpful 5 - tyre reviewed on February 9, 2014
Given 60% while driving a lancer (210/45 R18 W) on a combination of roads for 20,000 easy going miles
Good in wet and dry grip. Very responsive but very noisy. When crusing at 100km above, it very noisy.
Helpful 4 - tyre reviewed on October 14, 2009
Have you driven on the Yokohama Advan A10 tyre?

Have YOU got experience with the Yokohama Advan A10? Help millions of other tyre buyers

Review your Yokohama Advan A10 >

Given 65% while driving a Mitsubishi Lancer GTE 2.0 Ralliart Mivec (215/45 R18 W) on a combination of roads for 10 average miles
I am a Malaysian living in the town area, these tyres came fitted as standard on my Mitsubishi Lancer GTE 2.0 final edition. I am not looking for sports car performance tyres, but I know the need for safety at speed. I was really frustrated when the sidewall of my 2 front tyres cracked at just 10000 miles of driving. I heard many people suffered the same problem. So I wont buy this Yokohama tyres anymore since they made me lost so much money plus it was hard to find stokis in my area. In terms of the road holding, it was impressive and we felt safe at all times in dry conditions. However the noise and harshness of these tyres were very bad. Any journey greater than an hour and everyone suffered bad aches. During wet condition the handling felt a bit slippery and not so stable. They made u to stay cautious at all time during the rain. The wear was just ok. Malaysia's roads are unforgiving. Some areas have nice highway style driving, but most areas are B roads at best. Now Im using Michelin Primacy 4 tyre as i heard it has a better performance. But they are still new for me to be reviewed. Just wait until i ve tested in all features first, then I'll let u all know.
Helpful 2 - tyre reviewed on December 24, 2019
Given 47% while driving a Mitsubishi Lancer EX 2.0 GT (215/45 R18 W) on mostly town for 24,500 average miles
These tyres came as stick on my Lancer Ralliart in 2014. rotated only about 3 times max, i should've do 2 times more. but anyways. The front tyre's outside tread, all gone. thats only at 24000K driven. Mostly australian Town road. occasionally I go for bit of fast driving for the feel of push against the seat. I also go corners bit fast, probably 50% of the time. Thats probably why it wears out on the outside mostly. the inner and centre tread still got maybe 4-5mm left ( front two) the rear two goes normal so far but the outside tread has started to show signs of uneven wear, need an alignment...anyways, Dry grip are very good. Wet grip, scared me by surprise. In a rainy day or non raining but just wet/oil (standard Aussie town's tarmac road), it looses it. When I tried to turn corner after stopping, Fish tail the car, going like a snake pattern. lucky there was no car nearby. This is after I have the car for about 2 month. The road noise just terrible over all. Im not sure whether its due to Mitsubishi general poor road/cabin noise isolation or just the tyre itself. the Vibration, the hash ride, the coarse feeling while driving, the noise from tyre or the road, Im glade now its due for a change. I just ordered the KU39, Reviews and suggestions from friends have been good. I will test it out soon and make a review on that tyre. I would genuinely advise people to avoid the A10 tyre. they are ok when new, not so great when worn down.
Helpful 1 - tyre reviewed on April 19, 2016
Want your tyres to save you money on petrol? Click here!

Given 50% while driving a Mitsubishi Lancer VR Sportback (215/45 R18 W) on mostly town for 19,000 average miles
Really disappointing wear they have suffered, the change because they have lost grip and wear suffered has been severe, without aggressive driving. The front two are completely smooth on the inside (possibly either by misalignment, even that if he left the factory is by the fall of the front axle) but after five years the change for two reasons the desgate primarily and how long they have mounted. I will never buy this brand, also far Car Series is 215-45 R18 and 225/40 R18 now be installing some that are much more economical.

Saludos desde Barcelona.!
Helpful 1 - tyre reviewed on January 21, 2015
Given 66% while driving a Mitsubishi Lancer EX 2.0 GT (225/45 R17) on mostly country roads for 31,000 average miles
I am an Australian living in Thailand and these tyres came fitted as standard on my Mitsubishi Lancer GT. I am not looking for sports car performance, but know the need for safety at speed. The road holding is very impressive and we felt safe at all times in all conditions. However the noise and harshness of these tyres was very bad. Any journey greater than an hour and everyone suffered bad aches. The wear was impressive though....50,000kms. And Thailand roads are unforgiving. Some areas have nice highway style driving, but most areas are B roads at best. I used this website to review tyres when I needed to change. I was hoping to move away from Yokohama altogether. However sourcing alternate tyres for my Lancer locally proved frustrating. Reluctantly I chose Yokohama Advan dBs. To my delight these tyres are sensational. The same road holding with great comfort and low noise. Now I just hope to get as much life from them as the previous.
Helpful 1 - tyre reviewed on November 6, 2013
Given 54% while driving a Mitsubishi Lancer EX 2.0 GT (225/45 R17) on track for 7,000 average miles
I've never owned before a tyre that lasts less than 10000 miles.
Helpful 1 - tyre reviewed on May 20, 2013
Given 51% while driving a Honda CR Z (195/55 R16) on a combination of roads for 7,990 spirited miles
These tyres were fitted as standard to my Honda CR-Z when I bought it. The car itself had only done about 6900 miles and was bought as an ex-Honda rep mobile so presumably most of those had been done on motorways and test tracks. I've put about 1000 miles on them myself and they are already down to about 50% tread, so I wouldn't expect more than 15-18,000 miles out of a set.

These tyres are a bit of a mystery to me actually because they have all the hallmarks of an economy tyre (hard compound, asymmetric tread design, come as standard equipment on a car designed for economy) yet somehow still manage to return pretty disappointing economy figures and are officially rated as a D for economy. I'm getting around 42mpg out of my hybrid CR-Z, and whilst I drive in a spirited manner, I'm not a hooligan redlining at every traffic light or smashing 100 on motorways, I stick to speed limits and hit the Eco button when in heavy traffic. If the official figures are to be believed, and I don't think in this case that they are in any way unreasonable, I should be returning around 48mpg, which I'm obviously not. I can only suspect it has something to do with the tyres.

Grip in the dry is as good as can be expected from any Yokohama tyre (this is the third set I've tried) but wet grip leaves a lot to be desired, on properly wet roads they seem sure footed enough and they've never come unstuck round a corner on me, but you know that point where a road isn't wet-wet and it isn't dry, it's sort of oily/slick? That's when this tyre really suffers. Cornering remains stable at sensible speeds but pulling out of junctions becomes more about taking it slow and steady, as any revs over about 1700rpm spins the wheels in these oily conditions causing the ESC to kick in, making a quick junction getaway become a juddery, slow crawl from the line, not good on roundabouts or crossing carriageways. That said, if you understand this and adjust your driving accordingly it shouldn't be an issue, just drive safely and take a bit extra time on oily roads.

I bought the car in December so had the opportunity to treat it to some British snow and the tyres performed exactly as you'd expect summer tyres to.

All-in-all they aren't the worst tyre out there, they just aren't the best and definitely don't live up to the Yokohama name. Considering a new set of these for my car will cost around Â£110 a corner, I think it's safe to say I will not be buying them again, I'll stick with a tyre I know to grip better in oily conditions like the S-Drive or go for a tyre that returns better mpg figures.
Helpful 2 - tyre reviewed on April 10, 2013
Given 84% while driving a Subaru (225/45 R17) on mostly town for 30,000 spirited miles
Got these tyres on my AWD Subaru 3years ago. Just needed to replace 2 now.
Great grip on the dry, I found them fine in the wet too.
Only average offroad.
I drive very aggressively so extremely impressed that they lasted 3 years.