The BFGoodrich gForce Profiler 2 is a High Performance Summer tyre designed to be fitted to Passenger Cars. 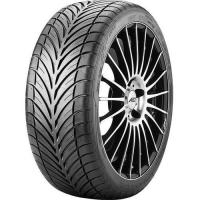 Sorry, we don't currently have any magazine tyre tests for the BFGoodrich gForce Profiler 2

Have YOU got experience with the BFGoodrich gForce Profiler 2? Help millions of other tyre buyers

Given 96% while driving a Honda CIVIC 1.6 VTEC (195/55 R15) on mostly country roads for 48,000 spirited miles
absolutely the best tyres ever made, good traction and handling characteristics and very low wear rate. driven on crappy South African roads. its a pity BF Goodrich in no longer on the market. I would of bought then in a heart beat
Helpful 5 - tyre reviewed on June 5, 2013
Given 77% while driving a Ford MONDEO (235/45 R17) on a combination of roads for 0 easy going miles
Put a set on my MONDEO 1,8TDCI ROTATED AFTER 12,500 MILES. REARS GONE AFTER 24,000 FROUNT STILL OK WIGTH 2.5MM ON THEM. GOOD VALUE TYRE AND GOOE WEAR. OVERALL VERY HAPPY CONSIDERING I ONLY GOT 14,000 MILES FROM A SET OF PIRELLI PZERO ROSSO
Helpful 5 - tyre reviewed on December 3, 2012
All Season VS Winter Tyres: What is REALLY Best?! Click to find out!

The grip is amazing, the braking is incredible, and under full acceleration, it doesn't lose grip at all. even in the wet I was stunned by the level of grip.


I would definitely buy again.
Helpful 3 - tyre reviewed on May 2, 2012
Given 84% while driving a Ford Focus ST (225/40 R18 W) on a combination of roads for 7,000 spirited miles
Good tyres, cheap @ Â£112.20 each and lasted 7,000 miles. Good in wet conditions and when turning at high speeds.
Helpful 2 - tyre reviewed on February 16, 2012
Given 89% while driving a SEAT Ibiza FR TDi (205/45 R16) on a combination of roads for 30,000 average miles
Full set fitted at 19,000 miles and 24,000 miles from the front tyres with all kinds of driving not the quietest of tyres but great all round performance with good levels of warm up and grip in both wet and dry conditions.
Rears still going after 30,000 miles with about 3.5mm tread left am hunting for a new full set.
Put Hankook V12 on after and they spin up alot easier in cold conditions and seem to under steer more due to a softer side way.
All in all I will be buying profiler 2's again if I can get them good trye
Helpful 2 - tyre reviewed on February 1, 2012
Given 90% while driving a Opel MV6 3,2l turbo (478HP) (235/40 R18 W) on a combination of roads for 10,000 spirited miles
This is tyre for drivers.Yust to speeding cose it's my pleasure mostly over limit (100 Mph to 160Mph). G-Force is great tyre much better than many of others more expensives.Even on dry or at wet car is staying at road no metter how fast youare.I tryed many types but this are for high speed.Breaking is great even on dry or wet at any kind of tarmac surfaces.Only one thing is that first 5 min of driving don't squeze pedal to the flor, need time to get it in right temperature. For my opinion one of the best at the moment, the only one was better than this was Good Eagle F1 with simmilar rips.That was ''king''
Helpful 2 - tyre reviewed on April 3, 2011
Given 94% while driving a BMW E39 5 series (225/45 R17) on a combination of roads for 12,000 spirited miles
Fantastic tyre for the money highly impresses with these far better than the bridgestone Re050A that were on it
Helpful 2 - tyre reviewed on January 27, 2011
Given 88% while driving a Ford Mondeo (225/45 R17) on a combination of roads for 30,000 average miles
Brilliant - just had to change my front tyres on a Mondeo ST TDCI - I did 30,000miles on these tyres - shame i couldn't get them again!!! Next time I will hunt around for them , but MOT next week so needs must!

Helpful 2 - tyre reviewed on January 4, 2011
Given 94% while driving a BMW e36 (245/40 R17 W) on a combination of roads for 1,500 spirited miles
Well back again reviewing some more rubber, my last review only 6 months ago on the Falken 452 I would change if I could I did not realise how dangerous they would become with wear more about that later.
Had a big problem thinking what to buy next as there are some good reviews but it appears to me that all tyre dealers have there own prefered tyre especially in the mid range section and probably get commission on selling these so after deciding on the BFG'S I had to do some hunting for a dealer.

After speaking to a few it was very clear that these tyres are a subsidiary of Michelin made in the same factory with basicly the same rubber so I wanted to give them ago after some good reviews.
I have left it a while before writting so as to give these a fair chance saying that I have just purchased two for for the front ( 225/45/17 ).

I have not been dissapointed these tyres are very good,I have found them to be very quiet with little road noise, the handling is fantastic they really stay stuck to the road,I have leaned on these and found nothing but grip all the way. I have noticed a vast improvement in ride comfort as the car does not skip about. These also have some pretty good rim protection with the wheels being nicely " set in ".
As I said I have just had some front ones fitted after the Michelin pilot sport 2's had finally seen better days after 26,000 miles and I cannot notice any difference in handling, saying that I had only just about managed to cover 100 miles or so on the new front tyres when driving down country I encountered very heavy rain.The BFG'S were great in wet weather with no aquaplanning even going through large puddles and flooded areas of road, I always felt they were on the road and all the grip was there even around tight bends on country roads.Down the motorways these sit nicely at speed and feel good.It looks like these are going to last as well as I have been running the rears for a while and there appears to be no alarming wear rate either.
So far so good then, I don't think anyone would be dissapointed with these so highly recomend them as I now have a matching set all round.

On the subject of the Falkens 452, had these on the rear before the BF'S after reading reviews, these ended up a total disaster once worn down which was not long only 2500 miles and 6 months of driving ( very poor value for money ) I thought as did my dad that something was wrong with the rear suspension on my car it skiped all over the place and God for bid you if it was wet these were a nightmare. I seriously thought something was wrong with the car, the ride was hard and uncomfortable and the back end was a accident waiting to happen. It just shows you you get what you pay for but in the case of the BFG'S it looks like you get a really good all rounder.I would say on price that these are maybe not as cheap and there are other alternatives but I think these are proving worth the money.
Not many reviews for these tyres on this site not sure if this is because these are hard to get hold of elsewere or what but hope this one helps.

Helpful 2 - tyre reviewed on August 22, 2010
Given 81% while driving a Ford Fiesta (195/55 R15) on a combination of roads for 26,000 average miles
Bfgoodrich tyres had amazing wear compared to continental (premium continental) on the front of the car (front wheel drive). The goodrich have done an extra 80000miles more than my continentals did.i would recommend 100%
Helpful 2 - tyre reviewed on June 11, 2010
Next Page >>