The Vredestein Wintrac is a Premium Touring Winter tyre designed to be fitted to Passenger Cars. The Wintrac is unranked of 50 Winter Premium Touring tyres. 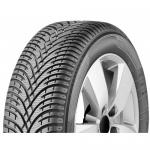 We will never publish or share your email address
Have you driven on the Vredestein Wintrac tyre?

Have YOU got experience with the Vredestein Wintrac? Help millions of other tyre buyers

Given 88% while driving a Kia Motors Sportage (215/70 R16) on a combination of roads for 3,000 average miles
I couldn't find much information on these tyres online and I have bought it because for my winter tyre rims. I had a very limited choice in 215/70 r16 size. Money-wise these were quite close to the premium options like Bridgestone Blizzak but they had better speed index (H which my car manufacturer recommends as opposed to T on Blizzaks and other tyres), were more quiet and had better fuel consumption. I've read a handful of reviews before, mostly positive. I had some winter Hankooks before which I have bought with the car but these were almost 8 years old even though they were driven maybe 3000km altogether. The Hankooks were behaving like a jelly on a highway, I was not impressed. There was this feeling that rear tyres responded very slowly while changing lanes, maybe that's why it has a T speed index. Suitable maybe for the city but they don't procuce them anymore. Vredesteins felt actually better than summer Hankooks k415 (225/60 r17) the previous owner left me (please bear in mind these were old tyres as well and I'll be replacing them this season). I've used it on snow, in the wet and also on snow/ice mixture on a track and they actually kept up with the premium offerings on higher diameter rims. Absolutely no complaints for now. If you move your rim size to 17 inches you've got much more choice with similar parameters so maybe then it would be a question of price/performance ratio.
Helpful 2 - tyre reviewed on April 3, 2022
Given 90% while driving a SEAT Cupra 300 (235/35 R19) on mostly country roads for 4,000 average miles
Been very pleased with these tyres. Give a lot of confidence in winter conditions. Very good on icy ungritted roads . Excellent on motorways in the wet .For the price , can’t recommend them enough
Helpful 2 - tyre reviewed on February 4, 2022
Want your tyres to save you money on petrol? Click here!