The Landsail LS388 AS is a Touring All Season tyre designed to be fitted to Passenger Cars. 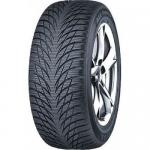 Given 94% while driving a Peugeot 405 (175/70 R14 T) on a combination of roads for 11,000 average miles
Got a pair of these on the front of my old workhorse Pug around June last year. The car's used mainly for business, carrying stock and tools, and regularly has it's load carrying abilities pushed to the limit.

Since then it's covered 11k miles of local (country roads), some town work, and 3 or 4 long distance motorway trips, including a couple fully loaded with camping gear and with a trailer attached.

Frankly, the tyres were chosen because they were cheap. I didn't expect much from them but needed a couple as the old ones were getting low. I've always taken the view that ditch-finders don't find ditches unless you go looking for them, but these certainly aren't ditch-finders despite only costing about Â£40 each fully fitted and balanced!

Within a few miles of having them fitted I noticed that they were appreciably quieter than the old Goodyears and seemed at least as responsive. I tend not to intentionally push the grip limits on public roads but did put these "through their paces" just to get an idea of how they'd react.

Grip is plentiful for cornering and braking - they happily gave just over 90% straight-line-dry brake efficiency (measured by Tapley) before complaining and cope well with damp roads and standing water (common around these parts!). Pushed to the limit they give a nice gentle warning back through the wheel, followed by a bit of a squeal, and will regain grip easily unless you just keep pushing.

Admittedly, some of their ability with standing water will be down to the very narrow width by today's standards but that's the size I needed!

Haven't had much of a chance to try out their cold / snow / ice performance but, on the 2 or 3 icy days we've had since, I've had no problem with traction or control even on re-frozen snow "the morning after" an unexpected couple of inches.

Comfort is good, undoubtedly helped by the high (again, by today's standards) profile and noise, as mentioned earlier, has remained pleasantly low - a definite benefit when your car's not as soundproof as most are today!

The one slight downside is that they have a slightly soft compound so wear rates aren't great. That soft compound probably explains a lot of their positive characteristics but, in 11k miles, they've used up about 4mm of tread so will probably end up lasting around 18k miles total. That said, that's on the front, driven, wheels of a fairly heavy diesel that's been used to carry considerable loads around twisty local roads and on motorway at multi-lepton speeds.

As to the "would I buy again" questions - I've just replaced the rears with a pair of the same.
Helpful 76 - tyre reviewed on February 4, 2015
Given 81% while driving a SEAT ALhambra TDi (215/55 R16 H) on a combination of roads for 13,000 average miles
My Sest Alhambra uses front tyres every 10,000 miles, whether they are cheap or premium tyres. I was pleasantly surprised that the cheap Landsail lasted 13,000. They have handled fine in all kinds of weather. I haven't seen any ditches in the last year, so don't believe the negative reviews. Fuel economy is just as good as with all previous tyre brands I've tried. So ... I've just put another pair on the front.
Helpful 36 - tyre reviewed on March 23, 2018
Ford (225/40 R18) on a combination of roads for 1,000 average miles
Simply put these tyres are awful. Will never buy these again for my car. Have no confidence in these tyres in the wet and make driving on wet days a very nervous experience.
They are okay-ish in the dry and are not that noisy.
I am glad the front tyres have worn down sufficiently enough to warrant changing them, can't wait to get them off!!!
Helpful 25 - tyre reviewed on July 26, 2017
Have you driven on the Landsail LS388 AS tyre?

Have YOU got experience with the Landsail LS388 AS? Help millions of other tyre buyers

Review your Landsail LS388 AS >

Given 64% while driving a Toyota Prius III (220/45 R17) on a combination of roads for 20,000 easy going miles
Had this on Prius, was 2 years old when I got them. Always loosing pressure, went to several service, could not figure out why. Other than that it was not that bad
Helpful 1 - tyre reviewed on June 13, 2022
Given 84% while driving a Toyota Yaris Mk2 1.33 (1NR FE) (195/50 R16) on a combination of roads for 12,000 average miles
Had LS388s on my used car for nearly a year, they handle perfectly well in all weather, and at no point have I felt that they'd lost traction or had any problems with them. As my car isn't very fast I cannot speak for higher end vehicles. But on my Yaris they have been brilliant. The tread lasts a very long time.
Helpful 1 - tyre reviewed on June 10, 2022
Want the best Performance summer tyre? Click here!

Given 74% while driving a Ford Kuga (225/45 R17) on mostly country roads for 5,000 average miles
Driving Ford Kuga. Bought these because of price and sound. Original tyres noisy. LS388 very quiet. Surprisingly no problems att all on wet rainy roads. Very good grip overall. I should probably use LS588 on this car but I feel quite comfortable with LS388 instead. For off road or 99% gravel road I would probably choose something else.
Helpful 2 - tyre reviewed on February 16, 2022
Given 73% while driving a Toyota Avensis D4D 2.2 T spirit (205/55 R16 V) on a combination of roads for 20,000 easy going miles
I like it in general. BUT, they keep leaking I have to inflate them every 10 days, I am 100% sure there is no puncture and have been re-fitted 4 times by 4 different garages, the alloy wheels are new. I am not the only person complaining the leaking problem.
Helpful 8 - tyre reviewed on February 25, 2021
Given 68% while driving a Ford Focus 2.0 S TDCi (215/50 R17 R) on a combination of roads for 8,000 average miles
Although it is made in mainland China, it is actually quite excellent in use and has a very high level of noise performance. Although the grip on dry ground (sudden braking) is not so ideal, it is definitely no problem in normal driving. The rain is good, cheap and good
Helpful 9 - tyre reviewed on January 7, 2021
Given 21% while driving a Kia Motors Picanto (165/60 R14 H) on mostly town for 7,000 easy going miles
Fitted them on my 05 Kia Picanto 1.1 Pros: Cheap, £29 a corner fitted. Still have 3mm after 7k miles, it is better than expected. Cons: Lack of grip in both dry and wet, I would not expect much on a £29 tyre, but I do not feel safe driving my car in wet on these LS388. I wouldn't recommend these tyres, should have spent more to get a better one.
Helpful 6 - tyre reviewed on December 23, 2020
Given 36% while driving a Toyota Auris (225/55 R16 H) on mostly town for 0 miles
Not very impressed with these done 12000 miles will not buy again,,,,
Helpful 3 - tyre reviewed on December 9, 2020
Vauxhall (225/45 R17) on mostly motorways for 18 average miles
Put these on the front of an Astra at 48k miles, now getting near at 66k so about 20k on the front must be fairly ok. Quiet when new and I havnt noticed they get noisy when older (which some tyres definitely do). I don't push the car or tyres hard so have found them very good given my driving style. A really quite good average tyre with no nasty surprises IME.
Helpful 2 - tyre reviewed on November 24, 2020
Given 84% while driving a Mercedes Benz C220 cdi (195/65 R15 H) on mostly town for 10 average miles
Very impressed with these tyre had 2 fitted and can't fault them would recommend to anyone great tyre great price just hope the prices don't rise to much as I would buy again. Never really been one for budget tyre cause of bad experiences with them. But can not fault the landsail good grip. Quiet on the road and good price running them on the back of a merc c220 saloon
Helpful 2 - tyre reviewed on October 9, 2020
Given 32% while driving a Kia Motors Sportage (235/55 R17 V) on a combination of roads for 19,000 average miles
A set of Landsail LS388 tyres cane already fitted to my car. They had about 3mm tread left and were evenly worn and when I changed them that had covered 19,000 miles. These tyres are noisy! I hadn’t realised just how loud they were until I swapped to equally noise rated Continentals (71db) and suddenly felt as if I had lost my hearing the difference is so noticeable. Wet grip is poor at lower temperatures, and snow grip is non existent. One of the Landsails when taken off had a split running between the long wide grooves and could have blown out at any minute. I would buy buy these tyres.
Helpful 11 - tyre reviewed on July 20, 2020
Given 91% while driving a Audi A3 (225/40 R18 W) on mostly town for 45,000 average miles
Had them on the car 3 years and did 45,000 miles on them. Unbelievable wear, all even and never a puncture until recently. The only reason i replaced them is because the puncture was on the edge and not worth a repair. I have indeed used them again.
Helpful 11 - tyre reviewed on April 16, 2020
Given 24% while driving a MINI Roadster JCW (205/45 R17 R) on mostly motorways for 350 spirited miles
Mini JCW had RF Pirelli P Zero 205/45/R17 84v Front & Rear. Left Rear Slow Puncture contacted National Dealer to replace, only had these Landsail once fitted on the Monday drove 350 miles felt as though the car was unstable to much body roll tyres didn't grip the road, to much understeer felt the rear end was going in a different direction. Felt extremely uncomfortable driving with these tyres. 5 Days later changed to Pirelli P Zero such a difference
Helpful 2 - tyre reviewed on March 28, 2020
Next Page >>