The Sava Eskimo S3 Plus is a Touring Winter tyre designed to be fitted to Passenger Cars. 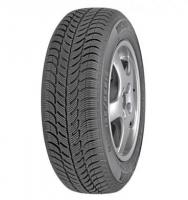 The Eskimo S3+ is ranked 31st of 90 Winter Touring tyres.

CON
- Poor grip on dry and wet tarmac.
- When they lose grip, they tend to be wild.
- Worn very fast, lasting 8000 miles, driven mostly in the city.
Helpful 88 - tyre reviewed on April 18, 2016
Given 91% while driving a Citroën 1.0 petrol (155/70 R13 T) on a combination of roads for 2,000 average miles
So, this is an initial review after driving on these tyres for 1 season from mid November to mid March in Croatis. I bought them new and they were made in 2016 in Poland. Take this review with a grain of salt because I can only compare these Eskimos to some old winter tyres (Klebers and Barums I think) that were on the car when I bought it and with my current summer tyres (Nokian iLines).

I decided to change my old tyres last fall when I noticed a disconcerting lack of grip on damp roads. I bought only 2 tyres because money was an issue and had them installed to the front. I bought them for 300 kunas ( approx. 40 euros) a piece at my local garage with everything included, so it was a good deal. The change was very positive. Dry grip was very good and wet grip was much improved (unlike some drivers here I don't find these tyres lacking in the wet, just the opposite, even when compared to my Nokians). Road feedback is good and at first I taught the handling was pretty good, that is until I put the Nokians on. The iLines are much better and much sportier, but to my surprise the Eskimos are more comfortable and quieter. Just to note my profile, or my car for that matter, isn't sporty but the differences are pretty noticeable.

OK, so they are a pretty decent winter tyre in these regards but where they really shine is where you'd expect them to: in the snow. We had a couple of days of snowfall here in Croatia and it was real "canadian" weather. I'm talking 30 centimeters of snow on the road in a couple of hours. I needed to make a trip to a nearby town and I felt confident after reading the reviews on this site. Let me tell you I was unstoppable. The snowplows couldn't clean the snow at the rate it was falling, the weather was really bad but I never lost control. I went up some steep roads and down feeling safe.

There you have it. These tyres are safe, comfortable, magnificent in the snow and cheap, although not sporty at all. The wear seems minimal for now and I can recommend them to people who want cheap and comfortable dedicated winter tyres.
Helpful 22 - tyre reviewed on May 1, 2017
Given 76% while driving a SEAT Toledo (185/60 R15 H) on a combination of roads for 7,000 average miles
Driven one winter season, very good on snow, soft tyre, comfortable and quiet, handling - medium rating, low price. These were made in Spain, XL version. I dont like Sava eskimo pattern. Estimated lasting on front tyres (front wheels drive) 20000+ km, on rear weels 30000+ km.
Helpful 8 - tyre reviewed on August 24, 2017
Have you driven on the Sava Eskimo S3 Plus tyre?

Have YOU got experience with the Sava Eskimo S3 Plus? Help millions of other tyre buyers

Review your Sava Eskimo S3 Plus >