The Toyo Snowprox S953 is a Premium Touring Winter tyre designed to be fitted to Passenger Cars.

This tyre has been replaced by the Toyo Snowprox S954. 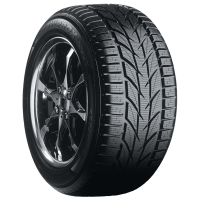 Given 92% while driving a BMW 520d M Sport (245/40 R18 V) on a combination of roads for 0 average miles
My car bmw e60 5 series, performed so well in snowy/icy mountain roads with these Toyos on. The car did whatever I wanted righaway, either accelerating, stopping, turning... either in snowy hill road or in snowy flat roads I am really surprised. I was not expecting such high performance, especially by considering that my car is RWD. They make you feel like you can go anywhere you want on snow with these tyres on. And can you imagine that they are such good on snow, with a very sporty size of 245/40/18 !

I definitely recommend them for everyone. They are really good in snow, in dry, in wet.

ps: I can not say anything for wear and tear, I am using them yet only for 3 months.
Helpful 12 - tyre reviewed on February 6, 2014
Given 91% while driving a Volkswagen Passat CC (225/45 R17) on a combination of roads for 3,000 spirited miles
I purchased these tires instead of my previous Dunlop SP on my CC Passat.
I tested them on icy road, on snow and wet and i can tell that i am more than surprised, as these tires are 35% less expensive than previous ones.
Especially i am satisfied in wet corners on higher speed and snow grip is fantastic.
Would recommend to anyone
my tire fitment is 235/45/17
Helpful 4 - tyre reviewed on January 6, 2015
Given 40% while driving a Toyota Verso 1.6 D4 D mpv (205/55 R16 H) on a combination of roads for 9,000 average miles
Hi all,

Got a Toyota Verso for 4 years, bought them 2 years ago. Would not recomend, had used Continental 850 for first 2 years, and those were much better than these; better on dry, wet, cornering, handling and road responce felt much better with Conti. IÂ´m going back to Conti, i know they are more expencive, but worth every penny.

Have YOU got experience with the Toyo Snowprox S953? Help millions of other tyre buyers

Given 60% while driving a Alfa Romeo 156 2.4 JTD mjet (215/45 R17 W) on a combination of roads for 1,500 average miles
Hi,
Bought these tyres last winter. They will last only one season... Not that they are worn. But I simply consider them as really dangerous tyres.
They are marketed as winter tyres. So you'd expect them to be quite adapted to dry and snow conditions. But unfortunately, they are not.
Quite simple : trying to drive up a hill in the mountains, with fresh and/or melted snow : I managed to arrive at my destination, but that was a really tough ride. Compared to my previous snow tyres (can't remember exactly which they were, but I think they were Continentals) on the same mountain and under the same conditions, it has been really difficult to get there.
About wet road ? Simple : if I enter a roundabout at about 35km/h, the whole car begins to slip all over the place. This experience has been reproductible on several different roundabouts, and thus the result cannot be considered as only a fact that there could have been some oil on the roundabout...
Good that, under those conditions, they show some progressiveness which allows you not to get out of the road...
On wet road, they're OK and even quite good... but for that, I already have some Toyo's R888 that do the job even better :-)

So this has been a real disappointment. Maybe they're simply not adapted to my car ? Or maybe I got the older rubber made which was reported as not good a few posts earlier ?
Can't tell, but as far as I am concerned : those will be replaced this year. Still have to decided what will replace them :-)

Helpful 2 - tyre reviewed on November 11, 2016
Given 71% while driving a Audi A3 8P Sport 2.0 FSI (225/45 R17 V) on a combination of roads for 2,000 average miles
The first thing to note about these tyres is that there are two versions, both with exactly the same name. The compound was changed midway through it's life, which resulted in the newer verions having much better wet grip on the official EU tests. I am reviewing the newer grippier version.

I unfortunately didn't get to test them on snow this winter, as we didn't have any, but we did have many cold days. During these I found them most excellent tyres, probably better than my previous Falkens. Predictable and very grippy in all conditions would be my assessment.

Effects on the car aside from grip were that the steering become incredibly light, and tyre noise level increased. In the type of car I have neither of these things were an issue.
Helpful 3 - tyre reviewed on April 6, 2014
All Season VS Winter Tyres: What is REALLY Best?! Click to find out!

Given 33% while driving a BMW 745i (225/45 R17) on a combination of roads for 11,000 average miles
Not very good for me...medium quality
Helpful 3 - tyre reviewed on December 25, 2013
Given 100% while driving a Alfa Romeo 1.9 JTD M (205/55 R16) on mostly town for 0 average miles
best price for what you get. amazing handling and grip. not very cheap but well worth the penny
Helpful 2 - tyre reviewed on November 25, 2012
Given 100% while driving a Vauxhall Insignia CDTI 160 (225/45 R17) on mostly motorways for 49,000 average miles
No selection box for the S953 Snow tyre.
The insignia is now retired and the 225.55V17 S953's were on it when it departed recording 49000 geniune miles, and if they had done 17000 miles I would have been equally impressed.
With the modern Snow/Winter tyre you don't have to demount in the summer, leave them on, they ride good 24/7/365.
My "boy racer" days are long gone and have left Progressiveness blank as I never reached a point where vehicle control was at the limit.
They not cheap, but you sure get fantastic value for money.
Should mention that in snow they are truly superb, never had any problems with 8" of the white stuff on the ground, just point the car and go.
Helpful 2 - tyre reviewed on March 29, 2012