The Pirelli Winter Snow Control Series 3 is a Premium Touring Winter tyre designed to be fitted to Passenger Cars.

This tyre has been replaced by the Pirelli Cinturato Winter. 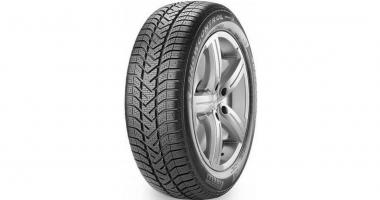 Given 90% while driving a Skoda Octavia (195/65 R15 T) on a combination of roads for 15,000 average miles
Slightly noisy even though it is presented as eco-friendly and low-noise tyre. Grip in the rain is very good. Dry pavement - very good. Snow - superb traction. Fuel consumption - no difference from summer tyres = good.
Helpful 58 - tyre reviewed on January 19, 2014
Given 29% while driving a BMW 320d (205/55 R16) on a combination of roads for 8,200 average miles
I'm a automobile expert; I've used many many cars with many many Tires! This tire is absolutey the worst! It's very noisy on dry, you can eliminate it but if can handle on snow or ice! But It doesn't! I had to leave my car today in a shopping mall's car park because of these tires!
Helpful 55 - tyre reviewed on December 8, 2013
Given 97% while driving a Mitsubishi Lancer GLXi (195/65 R15) on a combination of roads for 25,000 spirited miles
Very good tyres, I would buy them again. Superb traction and handling on snow, very good road feedback, on dry and wet you have safe handling, feeling and good car behavior. I reccomend them to everyone, best buy from premium brands.
Helpful 13 - tyre reviewed on December 3, 2016
Have you driven on the Pirelli Winter Snow Control Series 3 tyre?

Have YOU got experience with the Pirelli Winter Snow Control Series 3? Help millions of other tyre buyers

Given 91% while driving a MINI Cooper (195/55 R16) on for 1,500 spirited miles
I used these for a winter in New England but didn't drive in active snow storms, only on packed snow roads. They drive well in dry and wet conditions in a cold climate and did fine on packed snow (at slow speeds). I'd buy them again.
Helpful 4 - tyre reviewed on September 24, 2022
Given 81% while driving a Opel Astra K 1.4T 150 (205/55 R16) on a combination of roads for 31,050 spirited miles
Great tyre on snow. Great feedback on wheel. I pushed to the limit this tire and i would like to say it's perfect for sportive driving. I used Continental TS860 before, Pirelli has more hardened skin and it feels more safe.
Helpful 5 - tyre reviewed on November 30, 2021
All Season VS Winter Tyres: What is REALLY Best?! Click to find out!

Given 77% while driving a MINI Cooper D (175/55 R15) on mostly country roads for 33,000 average miles
The Pirelli's came as original equipment under the winter tyres option from Mini when we go our first Mini in 2014. We've used them on two Mini's now over three winters including three trips to the French Alps, an 1,800 mile round trip. We live in the Pennines in West Yorkshire up small country lanes that are never gritted or cleared. We've had a bit of snow over the last three winters and a bit of snow driving in the Alps. The tyres have felt stable and secure at all times whether on dry, wet or snowy roads. On the way down to France this year, we were driving through heavy rain at the maximum allowed of 110 km/h and climbing snow covered motorways following the snow ploughs and the tyres handled everything with ease. On the way back we hit snow in West Yorkshire around Holmfirth and whilst other cars were stuck, turning back or, in two cases, in the stone walls, we just carried on up hill, down dale and around the bends. The most reassuring thing about these tyres in the snow is that when you hit the brakes, the car stops. The only other tyres that I can compare them with are Goodyear Vector4Seasons which I had for a year on the car before the first Mini. They were a good performer on snow for a four season tyre but I think the Pirelli's edge them on the snow. We've done almost 33,000 miles on them so they are wearing well. They are a bit more noisy than summer tyres especially on slightly rough surfaces or concrete roads. This isn't much of a problem in France, however, as the motorways generally have very good surfaces.
Helpful 6 - tyre reviewed on February 15, 2018
Given 91% while driving a Ford Mondeo (205/55 R16 T) on mostly motorways for 10,000 average miles
Great winter tyres. Very good braking and traction in snow and wet. For a winter tyre remarkably good steering feedback.
Helpful 7 - tyre reviewed on January 18, 2014
Given 81% while driving a Mazda 3 2.0 DISI (205/55 R16 T) on a combination of roads for 5,000 average miles
Very good traction in snow and great comfort even on bumpy roads. In the wet it feels very safe, it drives through puddles easily even at higher speeds. At speeds around 100km/h it is slightly noisy (compared to Michelin Alpin 4). With my 5000 miles it is too soon to comment on wear.
Helpful 7 - tyre reviewed on September 29, 2013
Given 73% while driving a Opel Astra H CDTI (195/65 R15) on mostly motorways for 10,000 average miles
this is a very good tyre, just the wear isn't great!
Helpful 5 - tyre reviewed on May 9, 2013