The Achilles 2233 is a Touring Summer tyre designed to be fitted to Passenger Cars. 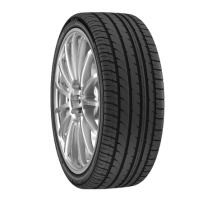 Given 47% while driving a Volvo V50 estate (205/55 R16 V) on a combination of roads for 500 easy going miles
I have goodyear tyres on front wheels, achilles on rear wheels.
On rainy roads the rear looses grip easily.
Today the skid control system got busy at a highway exit turn.
You never know when you need the grip, I recommend you buy
something else!
Helpful 70 - tyre reviewed on August 29, 2016
Given 64% while driving a Volkswagen Golf Estate 2.0 tdi 140 (245/40 R18) on mostly town for 5,000 average miles
Replaced my OEM Pirelli Cinturato P7 225/40/18 for these on my Golf Mark 7 Estate 2.0 TDI as I wanted additional rim curb scratch protection. Got them extremely cheap here in the Philippines for only about US$ 80 a piece. They cope really well with the extremely potholed roads of Manila, and are pretty comfortable. Not the most comfortable, but good enough. Road noise on the highway is way louder than the Cinturato P7s, but is still alright. Won't mess up a good conversation. Having my TDI tuned to 314ft/lb of torque sure made these tires scream and terribly lost grip in the wet, but in the dry, these tires are excellent.
Helpful 16 - tyre reviewed on September 16, 2018
Given 22% while driving a Skoda Yeti 4 x 4 (225/55 R17) on a combination of roads for 100 average miles
I have just had a full set of the Achilles tyres fitted to my Skoda Yeti 2.0L 4x4, and I must say, I am not at all impressed. I know I didnâ€™t pay a Kingâ€™s ransom for them, but to say I am underwhelmed, well, they actually feel unsafe. To look at, the tred is very, well, missing is the only way to describe it. The amount of grooves cut into the tyre are very few, causing the road handling to be very poor indeed, and with much movement of the vehicle when at speed; and worse still when in the wet. In fact, I would go as far as to say, the road holding of these tyres, is poorer than the old tyres I had taken of my car; and they were almost bald.
The only plus point with the tyres is, there is quite a lot less road noise, than there was with my old tyres; but I would gladly swap noise for better road holding. Whether they will save me money on fuel, it is too early to say. Well, as the motto says: buy cheap, buy twice.
Helpful 5 - tyre reviewed on March 23, 2018
Have you driven on the Achilles 2233 tyre?

Have YOU got experience with the Achilles 2233? Help millions of other tyre buyers

Given 44% while driving a Audi A4 2.0 TDI 140 SLine (245/40 R18) on mostly country roads for 10,000 average miles
Tyres came with the car. In the wet they are a complete disaster. In the hot summer days they are ok but not very reassuring. They can be so loud I was checking my wheel bearings... Whatever the price for this tyre is it is too much. Would not fit them again if I got them for free.
Helpful 1 - tyre reviewed on March 28, 2022
Given 39% while driving a Toyota GT86 (225/35 R19) on a combination of roads for 30,000 miles
Have this on my car for about 18months and first I'll say is that the wet conditions are a weak point especially having a rwd car the wheels will spin if I accelerate abit too much which also comes into the wear rate as I drive a bit quicker around corners and notice the wear is close to the tread markers already. Dry conditions is good for the average or even above average driver but if you're an enthusiast or drive hard you're better off spending extra on something else
Helpful 1 - tyre reviewed on December 30, 2021
Want the best Performance summer tyre? Click here!

Not sure if I would buy these again. We get a lot of rain during our winter months in New Zealand and I need something that is safer in the rain.
Helpful 0 - tyre reviewed on March 11, 2018
Given 76% while driving a BMW 323i 1997 (215/45 R17) on mostly town for 0 spirited miles
I used to ran 17" 2233s on all fours (ideal front width, slightly stretched rears), before the fronts were replaced with worn 16" Dunlop SP01s after a pothole accident. I can only say good things about its behaviour in the dry. Pretty comfortable even on rough roads, possibly quiet (I have loud pipes and wind coming through the window, so I can't truly tell), excellent grip - all in a very affordable package. They also seem to last very long; I fitted them in August 2016. Two years and some 7000 miles of daily spirited driving later, they still have hairs on them.

However, in the wet, oh dear... My car only has a modest 245 Nm of torque, and even with the lightest throttle, on a slightly wet road, I can feel the rears losing grip accompanied with an unmistakable screeching noise. As for the fronts, they seem to be quite prone to hydroplaning, making handling on the wet rather unpredictable. These were relatively new, mostly city driven tires, mind you.

Although, overall I'm very pleased with em. I blew a couple rear tires and replaced them with another pair of 2233s.
Helpful 0 - tyre reviewed on February 7, 2018
Given 60% while driving a Pontiac G6 GT (225/45 R17) on a combination of roads for 2,000 average miles
Bought the car with the 2233 on it. Terrible in the rain! OK on dry roads.
Helpful 0 - tyre reviewed on August 13, 2017
Given 64% while driving a Subaru Impreza (205/50 R17) on a combination of roads for 20,000 spirited miles
Better than expected for the money. Driving on New Zealand chip sealed and gravel roads, beaches, launching and retrieving my boat at slippery ramps for the last 30000km + and they're half worn. Balanced well, quieter than the Dunlop SP Sport 01's and better grip on gravel roads. Great handling in the dry however wet weather grip is not too great, have to be a bit careful around roundabouts and taking corners in the wet. They've gotten noisier as they've worn down also. Best tires in their price bracket. A bit of a shame about the wet weather grip but it's bearable.
Helpful 2 - tyre reviewed on January 15, 2017
Given 80% while driving a Alfa Romeo (225/45 R17) on mostly motorways for 18,000 spirited miles
Used these for 20,000+kms with great wear rate and it worked extremely well in both wet and dry roads. never had any pulling or aquaplaning! Noise level was much lower than previous Kumho KU31.
Helpful 3 - tyre reviewed on January 17, 2016
Next Page >>