In order to be equipped for all weathers and temperatures, the new Kinergy 4S² offers specially balanced and constant performance features across all seasons. This is made possible by a directional tread being used for Hankook all-weather tyres for the first time, combined with a particularly innovative polymer silica tread mixture.

The Kinergy RS 2 is the 2022 Auto Express all season tyre of the year. 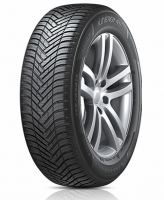 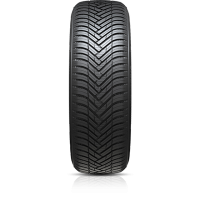 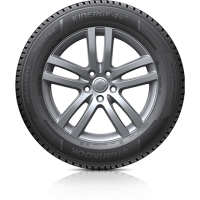 The Kinergy 4S2 is ranked 30th of 47 All Season Premium Touring tyres. 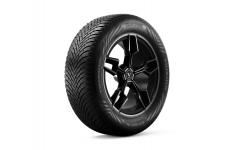 Nokian One - 84%
Sorry, we don't currently have any label data for the Hankook Kinergy 4S2

Questions and Answers for the Hankook Kinergy 4S2

Not in the sizes I've seen, but rim protection can vary from size to size so it would be worth contacting Hankook to find out whether the Kinergy 4S2 has rim protection.

2022-09-16 - I’m looking for all weather for my ID.3 the handbook look good but all guides say I need the 4S 2X I take it the difference is in the weight limit but are they the same tyre apart from this?

As long as you can get the correct load rating the non X you'll be fine, but yes in theory the 4S2X will be modified towards carrying higher loads.

Yes, it seems there is a HRS (Hankook Runflat System) version of the tyre available in 225/50 R17.

Given 81% while driving a SEAT 1.4 TSI (205/55 R16) on a combination of roads for 3,000 average miles
Very good all round tire
Helpful 87 - tyre reviewed on August 20, 2020
Given 67% while driving a Honda Civic 1.5T (225/45 R17 W) on mostly motorways for 1,000 average miles
Purchased a set of Kinergy 4s2 after watching Jonathan Benson's review, which suggested the Kinergy 4s2 was better than a lot of popular AS tyres (e.g. Michelin CrossClimates Plus, Bridgestone WeatherControl, and Continental AllSeasonContact) I have driven on them for around 1000 miles, so here are my initial thoughts about the Kinergy 4s2. I used Michelin CrossClimates Plus on this car before, therefore some comparisons will be discussed in this review. Pros: - Quiet - The sound isolation on my Civic X isn't fantastic, quite a lot of tyre noise inside the cabin when driving on motorways. Comparing to Michelin Primacy 4 and Michelin CrossClimates Plus, the Hankook Kinergy 4s2 is significantly quieter. I reduced my stereo volume by two levels after the Kinergy 4s2 fitted. - Comfort ride - I subjectively think the Kinergy 4s2 is comfortable, especially on bumpy roads. - Competitive Price - On the day of my purchase, the Kinergy 4s2 was at least 14% cheaper than Michelin CrossClimates Plus, Bridgestone WeatherControl, and Goodyear 4Seasons Gen 3. -Wet & dry braking -Good wet and dry braking performance. In normal usage, sometimes I forget I have the AS tyres on when braking, which is perfect. Cons:- Handling - A bit roly-poly and average feedback in general, which is expected. The most disappointing bit is that the tyres tend to understeer easily when you turn a corner a bit aggressive. Personally, I think the handling (especially dry handling) is a bit disappointing compared to Michelin CrossClimates Plus and I now have to drive a lot more gently. --I have not had a chance to drive them in ice/snow conditions, therefore I am not able to review how good they are in winter. Bottom line: Generally it is a good pick for day-to-day driving: comfortable, quiet, fairly priced, and with a reasonable grip. However, if you are more demanding in terms of handling, personally think there are better picks in the market.
Helpful 61 - tyre reviewed on December 1, 2020
Given 71% while driving a Volkswagen Polo 1.4 TDI (225/45 R17) on a combination of roads for 1,600 average miles
Does not give confidence after 150-170 km / h
Helpful 61 - tyre reviewed on December 4, 2020
Have you driven on the Hankook Kinergy 4S2 tyre?

Have YOU got experience with the Hankook Kinergy 4S2? Help millions of other tyre buyers

Given 90% while driving a Volkswagen Golf (195/65 R15) on a combination of roads for 9,000 spirited miles
Excellent tire and far outperformed the OEM tires (ContiProContact), especially in the snow. Very good in the snow and dry with slight weakness in wet breaking (subjective, not measured). Got me through a very bad snowstorm when they were new and passed many vehicles that had slid off the road. Even had good traction uphill. Tread depth after about 9,000 miles is at 7/32" (starting depth at 10/32") on the North American compound (warranty is 60,000 miles to 2/32"). Looking forward to see how it performs this winter provided there is adequate snow to drive through. I'm also writing this review because it seems that the tire is either discontinued entirely in the US or Tire Rack is electing not to carry it anymore. Further, I have noticed that many reviews on the tire appear to have been scrubbed from the Tire Rack website (I wrote one and was able to find it a week ago and now it is gone now that they no longer carry my tire size). I think it is a shame that this tire will no longer be offered as an option because it was a good buy compared to the more expensive Cross Climate 2. I know you can get tires from other places than Tire Rack but it is a major distributor and I use their website as a reference on what tires are available. Regardless, they should not be deleting or hiding reviews.
Helpful 2 - tyre reviewed on November 24, 2022
Given 81% while driving a Mazda 6 2.0 D (215/50 R17) on a combination of roads for 15,000 average miles
Excellent all season tyre. Confortable at dry and wet, even at light snow.
Helpful 2 - tyre reviewed on October 20, 2022
All Season VS Winter Tyres: What is REALLY Best?! Click to find out!

Given 61% while driving a MINI Cooper S (195/55 R16) on a combination of roads for 8,000 average miles
Dry: good dry performance for an all season tyre, I have not had to do any emergency stops but have done some fast cornering and the tyre does lean onto the sidewall but is good for an AS tyre and feels fairly rigid although this may be because I have a tyre with a higher load and speed index than the car requires.

Wet: performance here is very good and stays very good when it gets cold as you would expect from an AS tyre, handling in the wet is also very good.

Snow: these tyres *almost* feel like a full winter tyre in the snow, amazing traction on fresh and compacted snow, I was able to climb steep hills in a front wheel drive car with these following my brother driving will full winter tyres and neither of us had any slip and I was also able to stop fully on a snow covered hill.

Ice: ice performance is good but here is when you see the tyre lose out to a full winter tyre. You can stop on ice covered hills and not slide which is amazing as when i got out of the car I almost fell over as it was so icy. But when trying to climb hills on ice they aren't amazing as my front wheel drive open differential car couldn't climb even a few feet up an ice covered hill. Granted it was basically sheet ice so I wasn't expecting it to get up but I suspect a full winter tyre would have done better.

Wear: This is the main reason I won't be buying this tyre again. They have been on for only 8000 miles and are approaching 4mm which is where their snow performance will drop off and as I'm using them as a winter tyre this is quite important. I will be switching to something like the Goodyear Vector 4 seasons Gen-3 to get better wear.