The Toyo R888 is a Trackday and Competition Summer tyre designed to be fitted to Passenger Cars.

This tyre has been replaced by the Toyo R888 R. 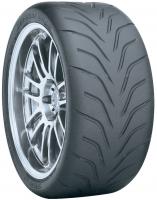 The R888 is ranked 23rd of 29 Summer Trackday and Competition tyres. 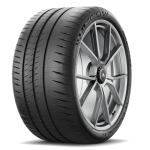 Michelin Pilot Sport Cup 2 - 80%
Sorry, we don't currently have any questions and answers for the Toyo R888. Why not submit a question to our tyre experts using the form below!

Wet traction is OK, just like on some regular tires, but BEWARE of standing water! Dry traction, cornering stability and steering responsiveness are superb. Also these tires at some speed produce sound like you need new wheel bearings... I wouldn't recommend this tire for a daily drive car...
Helpful 7 - tyre reviewed on March 26, 2013
Given 96% while driving a Mazda rx7 (225/45 R17) on a combination of roads for 0 spirited miles
On a nicely set up RX7 500+ wbhp - any good ...YES. Unsure of any spec. details as required good price sticky tyres & bought un-reviewed (bar use on standard RX7 for a few days). So, what I know:
1. No matter what I throw at them - supreme confidence .. even in wet- unreal in dry. Skips for a split of a second in wet/icy conditions but totally controllable. Enough to scare any all wheel drive WRX STI in same conditions lesser footed.
2. Warm up, not an issue I have found. Aqua planing not an issue either.
3. Noise, hard with my car (even with two boxes) but on the glide I know no quieter road tyre (less tread less noise).
4. Feedback excellent, like a Metzler race tyre on a race bike.
5. Limit? Well hard corners & actual 180-190mph not reached limit (235/265) - even over road like surfaces (rough).
6. Lasted - well have to say as fair if not better than any so far (quite a few, lol). i.e. well. Obviously check camber for inner wear.
7. Any caution? well (again) I had other Toyo's on other cars & the side wall typically stiff. Great for handling But if you have any dinks/wheel balance issues the stiffness of these side walls I think likely to create aggro. Wheel rims in good norm condition are no problem. But then you probably wouldn't be looking at these tyres anyway.
8. Finally :) - Recomend - if you wish a track, road legal tyre I really would not bother looking elsewhere, they are just the job these R888.
~If you just want excellent grip and wet safe driving on a road car (comparitive to the old Goodyear Eagle F1, Avon rainsport without the half wear aquaplaning, worse with falken & like) : then I suggest the excellent Marangoni Zeta Linea If you can get in your size, even gone hard they afford amazing grip.~
Price is worth the safety & performance (as needed) of these excellent R888's & better than many comparitives. Not sure if the benefit would be particular to a typical road car/use though.
Helpful 6 - tyre reviewed on January 8, 2013
Given 77% while driving a Renault Clio RS200 (225/45 R17) on a combination of roads for 7,000 spirited miles
Great tyre on my Clio RS200.
provides superb dry grip, evenon a wet road it performs better that other sport tyres, exceot if there is 1-2 cm of standing water.
It produces some noise when driving 70 km/h or more, on 120-130 very noisy.
Excellent for track day cars or weekend sport driving, not so good for daily drive.
Helpful 5 - tyre reviewed on August 27, 2014
Have you driven on the Toyo R888 tyre?

Have YOU got experience with the Toyo R888? Help millions of other tyre buyers

Given 94% while driving a Toyota supra turbo (315/30 R18 W) on a combination of roads for 25,000 spirited miles
This tire is amazing for an every day road tire and the occasional track day. It warms up almost instantly and puts the power down well. When it rains I have very little worry as I can still put down all 600whp, stop extremely well and be very confident in the corners, weather its sliding or gripping. Most other semi slicks I have used recently are just down right scary when it comes to wet weather.
I can't think of a better semi slick road tire for the price.
Helpful 2 - tyre reviewed on June 6, 2018
Given 61% while driving a (195/50 R15 W) on track for 2,000 spirited miles
Good track tyre, but the compound only really works between 60 degrees C and they tail off above 90 degrees C. They're better suited to heavier cars. Steering feel is also a little bit dead.
Helpful 2 - tyre reviewed on February 18, 2018
Westfield (205/60 R13) on mostly country roads for 10,000 spirited miles
Great In all weather's, what a tyre. Apparently doesn't like really cold weather.. May crack.. Never seen it tho.
Helpful 3 - tyre reviewed on January 13, 2018
Given 97% while driving a Ford Fiesta (195/50 R15 V) on track for 1,000 spirited miles
Absolutely excellent tyres, used on a Track day in my little fiesta. Dry grip is phenomenal, wet grip I can't comment on as I didn't use them in the wet. Noise doesn't make any odds when your car barely passes the fly-by at 105Db!

recomend to use Maxsport Competition tyres
Helpful 3 - tyre reviewed on February 22, 2014
Given 74% while driving a Mitsubishi EVO 9 Rally car (255/40 R17) on mostly country roads for 100 spirited miles
Just had these installed on my Group N Rally car in order to set it up for hill climb events. We fitted these on 17 inch wheels and drove the car with a Quantum Tarmac suspension. In the beginning I felt such a tremendous difference that reminded me of my earlier days in Formula Palmer Audi. Huge amounts of grip however maybe the wider size 255/40/17 may have slaughtered a bit the progressiveness of a narrower rally tarmac specced tyre. Overall my expectations in the dry grip department were not only met but exceeded. :))
Helpful 2 - tyre reviewed on March 8, 2013
Given 93% while driving a Porsche 996 911 Carrera 2 (295/30 R18) on a combination of roads for 15,000 average miles
These tyres are a hidden gem. I have had yoko and michelins but these take the cake. I think they have actually taken a second off the 0-100km/h sprint. I travel the M1 to Brisbane each day and can you believe I've already got 15,000km out of them. I didn't bank on that nor the fact I got them cheap initially but if I have to buy them again I see the price isn't on the low end. Highly recommended. The yokohamas can't compete with these. They do get better when warmed but that is ovestated as it takes 5 minutes only. Noisy but who cares. My suspension wanes before the tyres.
Helpful 1 - tyre reviewed on October 29, 2012
Given 90% while driving a Honda Honda Civic Hatchback (195/50 R15) on a combination of roads for 10,000 spirited miles
I've used these for the last 5 months with a mixture of road and track driving, with a combination of 2 medium compound R888's and 2 soft compound R888's.

Road - With differing gradient I found the R888's to be of great grip and always had confidence in them not to give way, but over smooth tarmac there was simply nothing more annoying than the WHOOOOOO they make, seriously had a feeling that a wheel bearing was gone in the car! They're not the comfiest tyre to use on street applications as they're stiff, harsh and extremely noisy! It was nice having the confidence there if needed. Thread wear wasn't extraordinarily bad considering the type of tyre they are, but every single mile they were used was simply worth it. With spirited driving in the dry you had no worries, but once it got wet out you have to slow down and think about it, standing water is the absolute devil with these but otherwise they're fine, once you can keep them in check! I'd rather stick with T1-R's for the street though.

Track - Along with the street use, these got me through 2 trackdays, a drag racing day and general usage. There's simply nothing better for the price to gain confidence, grip and a quick time on track! The amount of grip they give, even from cold is simply astonishing, you're always wondering whether they're going to slip out but they just keep on pulling and sticking to the ground. I've had the front step out only once and that was mostly due to driver error, while the backs were constantly providing me with sufficient grip to control the back kicking out under hard turning. In slight damp the soft compounds were a little bit harder to keep in check, but the mediums were simply a delight. Could not honestly believe how well these performed in the wet, I'd go as far as to say they're almost as good as they are in the dry! Thread wear throughout a trackday is immense, you just do NOT notice the tyre wearing down, they literally grip until they're slick all over! During the drag day, I had that much confidence in them that I could launch at 6000rpm without a single bit of wheelspin, just straight grip throughout every gear under very harsh circumstances!

I'll definitely be buying another set very, very soon! I absolutely can not, and will not go for anything else!
Helpful 1 - tyre reviewed on July 17, 2012
Next Page >>