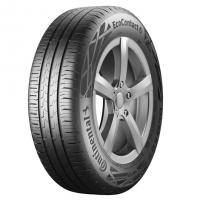 The EcoContact 6 is ranked 125th of 139 Summer Premium Touring tyres.

Questions and Answers for the Continental EcoContact 6

This video should help you

It is likely the Eco Contact 6 is made in multiple factories depending on size.

Given 84% while driving a Volkswagen Polo 1.4 16v (175/65 R14) on mostly town for 500 easy going miles
Nice , very nice and comford for my polo 9n.
Very stable when i drive for 120-150 kmh at motorways , warm early at town but note is very soft for long distance every day use .
Fine for daily use at town and a cool trip every weekend , thats all .
Helpful 458 - tyre reviewed on October 19, 2018
Given 10% while driving a Volkswagen Golf 7 TDI (205/55 R16 V) on a combination of roads for 14 average miles
I bought a pair of these for the front of my car and drove them approximately 14 miles home today. I have measured the tread depths and found them to be approximately 6.5 mm. The Continental Premium Contact 5 which were removed had done about 28000 miles and had worn down to approximately 3 to 4 mm. These tyres were original equipment on the car and I am pretty sure the tread depths were of the order of 8 mm when they were new. When I have bought quality tyres in the past, they have generally had around 8 mm of tread. If the tyres wear at the same rate, it appears I will have to replace them at a much lower mileage. It is possible that the new tyres will wear at a considerably reduced rate. However, I am sceptical and suspect that I will have to replace then at rather less than 28000 miles.
Are manufacturer's quietly reducing the life of their tyres for commercial reasons?
This practice is surely environmentally unsound. More used tyre casings will be produced for a given vehicle mileage. Greater stress should be placed on tread depth (and longevity) of tyres when they are advertised new. Perhaps a statement of the tread depth in the description should be legally required. This would help to sort out the tendency of tyre manufacturers toward selling tyres of reduced tread depth.
I will try and add a further review when I have had the tyres for a bit longer.
Helpful 80 - tyre reviewed on February 19, 2019
Given 71% while driving a Opel Astra K 1.6 CDTI (205/55 R16 V) on a combination of roads for 6,000 average miles
I have this on my car since march this year and after aprox. 9000km they have 1mm wear (from 6.5 when they come in new to 5.5 this week). I drove around 1300km straight (prague-bucharest) in 15h and they felt stable at 200km/h on highway. I would not buy again because of the low profile (6.5mm new).

Helpful 67 - tyre reviewed on July 18, 2019
Have you driven on the Continental EcoContact 6 tyre?

Have YOU got experience with the Continental EcoContact 6? Help millions of other tyre buyers

Given 18% while driving a Toyota Corolla (205/55 R16) on a combination of roads for 8,000 easy going miles
Came as OEM on Corolla Hybrid. Awful tyres. Skippery, poor wear and not quiet. Brand new just over 6mm tread. This no doubt is to get lower rolling resistence on tests. Avoid this rubbish at all costs.
Helpful 2 - tyre reviewed on November 25, 2022
Given 79% while driving a Mercedes Benz A180 W177 (225/45 R17) on mostly town for 3,000 average miles
Got these tyres as a replacement on the standard bridgestone turanza T005 on the Mercedes A180. The test results seem a bit low, but in real life they are actually pretty great tyres. They really brought up the luxury and comfy ride of the mercedes. The bridgestones actually didn't complement the ride, they were quite hard and very noisy, the Continentals are very quiet and absorbs bumbs very well on the road. Dry and wet grip are slightly above average, nothing special. Good and assuring for day to day commuting, but nothing for sportive driving, these tyres are comfort all the way in my opinion. The low rolling resistance also helped to bring down the fuelconsumption quite a bit.
Helpful 2 - tyre reviewed on November 15, 2022
All Season VS Winter Tyres: What is REALLY Best?! Click to find out!