The Falken Sincera SN110 Ecorun is a Premium Touring Summer tyre designed to be fitted to Passenger Cars. 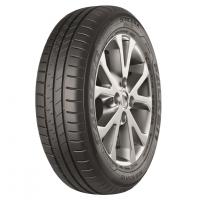 Hyundai Getz (175/65 R14) on a combination of roads for 0 spirited miles
Well I just got them for a few days. What is obvious after that short time. Positives: they absoluteley have strong grip in wet and same strong grip in dry. No compromises here. They are also high aquaplanning resistant, car doesnt feel driving through even bigger puddles. Noise is low. Negatives: on the other hand the superb grip sacrifices the car's efficency in terms of performance. The car's engine is struggling much more than with previous Goodyear Efficentgrip tyres. Means; drives noticably slower, accelerates slower. The handlingwheel is harder to turn. Other handling properties differences didnt notice so far, i belive there is nothing major. Conclusion: Driving definetly feels much safer than ever, safe in turns, they sticks to the road, very strong in braking, no slipping, have no ABS. Unfortunately eats a lot of cars power. Soft tyre. Thats about what I can say when comparing the new tyres with previous Goodyears, wich were a little dangerous in the rain, but very fast and sporty in dry. Overall I will see how will I like the new Falkens
Helpful 246 - tyre reviewed on July 24, 2020
Given 89% while driving a Renault Megane 3 1.5 dCi (225/45 R17) on a combination of roads for 1,000 average miles
Soft tyre. Seems like it is optimized for comfort rater than performance. I liked the braking performance for my size 205-60-16
Helpful 9 - tyre reviewed on May 10, 2022
Given 83% while driving a Chevrolet aveo (195/65 R15) on mostly town for 6,300 average miles
I have been driving those tires almost 1 year and 10.000 km. The breaking and turning ability is amazing. Even hard brake while I was expecting for ABS, the car stops very well without ABS. I mean, I forgot ABS symbol location on my dashboard! But also, it's some negatives. For example, the car body yawning too much while turning a corner about 80km/h. Another side is, tyre view looks like a tractor tyre. Definitely you can aware it's falken or another brand tire. Also, it is collecting stones on bad roads! I used to use 35-36psi for my vehicle.
Helpful 6 - tyre reviewed on August 10, 2022
Have you driven on the Falken Sincera SN110 Ecorun tyre?

Have YOU got experience with the Falken Sincera SN110 Ecorun? Help millions of other tyre buyers

Given 84% while driving a Smart fortwo passion (175/55 R15) on a combination of roads for 4,000 average miles
Purchased 4 of these SN110's to replace the tyres on my Smart Fortwo. The existing fronts were 8 year old Bridgestone B100's (155/60/15), still with half tread left (after 37k!!!), but extremely noisy, uncomfortable and downright lethal in the wet etc. The existing rears were 5 year old Khumo ES01 (175/55/15), loads of tread but noisy and just unremarkable in every way. Anyone with a Smart Fortwo will tell you that tyre choices are limited due to rather odd tyre sizes, off the shelf options were realistically Bridgestone, Continental (rubbish) and the Falkens.... Local tyre fitter suggested the Falkens as they are getting complaints about noise from the T005 Bridgestone's. To start with the Falkens are notably cheaper than Bridgestone/Continental offerings, but don't let that put you off because these tyres are good, really good. They are super quiet (even on a Smart car), super comfy (even on a Smart car), super in the wet (even in a Smat car), and work well in the dry to (even in a Smart car)!!!! They as others have mentioned they are soft, so I don't expect them to last long, but to be honest I really don't care......especially at the price paid..... I am far happier having a cheap, reliable, grippy, comfy, quiet tyre that I have to replace say every 5 years, than a noisy, crashy, uninspiring tyre that lasts for 10 years (but costs half the price). Before someone else says it, my other car is a BMW that I happily shod with Michelin Primacy 4 run flats (that I also love), so I am not some idiot that 'likes cheap' without a thought about safety etc, i'm just not an idiot that 'likes expensive' because they are expensive.... Well done Falken.....the SN110 is a cracking tyre for an everyday car.
Helpful 2 - tyre reviewed on November 1, 2022
Given 91% while driving a Fiat 500 (175/65 R14) on a combination of roads for 3,000 average miles
Bought a full set of these tyres to replace an all legal mixture of 2 x Joyride 1x Bridgestone and 1 x Giti tyres on my 17 Yr old granddaughters 1st car, a fiat 500. I drove back in driving rain over winding Pennine roads. The wet grip is excellent, comfort and handling so much better than anticipated and fuel consumption has improved. I’m happy with the improved safety from these tyres for an inexperienced driver. 3 months on and almost 3000 completed, no sign of wear, but only time will tell. Granddaughter commented that the car stops a lot quicker and she can drive round bends faster than before (not a good sign). I’d originally decided to purchase Toyo Nanoenergy 3 tyres, but for a similar price I bought these because of the A rated wet grip. Surprisingly in tests, mid range tyres on small rims perform better than premium tyres. Will definitely buy again and recommended them to a relative with Honda Civic.
Helpful 1 - tyre reviewed on October 26, 2022
All Season VS Winter Tyres: What is REALLY Best?! Click to find out!