The Falken ZIEX ZE914 EcoRun is a Premium Touring Summer tyre designed to be fitted to Passenger Cars. 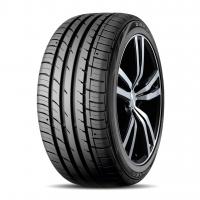 Nokian iLine - 88%
Sorry, we don't currently have any label data for the Falken ZIEX ZE914 EcoRun

Questions and Answers for the Falken ZIEX ZE914 EcoRun

The Falken ZIEX ZE914 EcoRun is an asymmetric tyre

2017-10-19 - Is this the same tyre as the ZE914'A' Ecorun? There are various sellers of this tyre and there seem to be many differing descriptions, including one with SO as a suffix. What is going on with this tyre? Personally I think that the VW/AUDI group are claiming it as their own!!

ZE914A is OEM version of the tyre. No difference between ZE914 and Ecorun.

2017-10-20 - If they are the same, what accounts for their different ratings. The ecorun scores worse than the predecessor. Although the ZE914A has better economy wet grip and noise levels. Anomaly?

Mid life updates and OE requirements can change how a tyre behaves during the EU label testing, if that's the scoring you're referring to.

Given 100% while driving a BMW E39 5 series (235/40 R18 W) on mostly motorways for 50,000 average miles
I was so disappointed about the comfort and steering of my 5er when her 18" M alloys wore P Zero and Eagle F1. The car drove like an overloaded lorry in ruts and on flat tyres. I was about to give up 18" in favour of standard 16" but decided to give them a very last chance, with reasonably priced tyres this time. I went for Falken ZIEX 912 (now 914) and - my goodness - what a change! Where have you been whole my life? Finally the car drives like it should! Road cracks nicely damped, great handling on wet (confident ride 160km/h on autobahn in the rain), reasonably long lasting. What can you ask more? It's a 3rd pair of 912/914 I order today. For 1,5t saloon, it's a tyre worth of every penny.
Helpful 216 - tyre reviewed on October 28, 2015
Given 77% while driving a Mercedes Benz C180 (225/45 R17) on mostly town for 7,500 easy going miles
Bought these tyres to replace my Nokian Line (see my review in the Nokian Line page) on my Mercedes C180. I had to change from the Nokian because there is no more dealership in my country, Singapore. Else, I would have just carry on with the Nokian.

I bought these tyres after seeing the good reviews on here as well as the reasonable price offered by local dealers. In Singapore, it is summer all year with plenty of rain. After putting about 12000km on these tyres on mainly town driving, I find that it has excellent dry grip and has low rolling resistence (good for people who likes to take pedal off and glide their cars). However, the wet grip is not exactly convincing. On wet smooth surface, such as metal drain covers or smooth cement floors used in carparks, these tyres got ZERO grip. Once you step on the brakes on such surface, the car's ABS kicks in and the car skids forward. You can only pray that it stops.

On normal wet surface, most time the grip is pretty good. But there was an instance when i jammed my brake (and i usually keep my distance), my car was initially braking ok but suddenly, it seem to lose grip and started skidding forward. The final moments before the car stopped i thought i was going to collide with the car in front. So for me these tyres are simply too unconvincing. It doesnt give me the feeling that i will be entirely safe on wet surface and i will not buy these tyres again.
Helpful 56 - tyre reviewed on August 17, 2017
Given 77% while driving a Honda Civic Type R (205/45 R17 W) on a combination of roads for 0 average miles
Had a pair of these fitted to the front of my EP3 type R for 18 months now. Bought for Â£70 each fitted and have been through 2 British summers. Have covered about 15'000 miles and they still have about 2.5mm remaining. That's pretty good as I use the car for a daily driver and don't exactly hang about. On a different car id estimate you could get 20-30'000 miles out of a set of these. Dry grip seems on par with the Avon ZZ5's i had on the front previously but I remember the Avons being slightly more progressive - had better feel when cornering fast. Cant comment for wet grip as i tend to drive differently being a biker etc. Overall the Falken is not bad value tyre for the money and I would consider buying again.
Helpful 22 - tyre reviewed on November 16, 2016
Have you driven on the Falken ZIEX ZE914 EcoRun tyre?

Have YOU got experience with the Falken ZIEX ZE914 EcoRun? Help millions of other tyre buyers

Given 54% while driving a Nissan Juke (215/55 R17) on mostly town for 8,000 average miles
i cant complain about any aspect of the tyres performance in typical british conditions however as for wear, i purchased 4 in august 2021 and do mainly town driving with occasional motorway driving (once a month) and the front tyres have virtually worn out at just 8000 miles, ive contacted falken hq in germanyboth in february 2022 and again in march 2022 but have not even had the curtesy of a reply. ive purchased budget/ecconomy radial tyres before for previous cars and got at least 18 months approx 20,000 miles out of a front set of tyres so i cant recommend these tyres for financial reason alone.
Helpful 2 - tyre reviewed on March 4, 2022
Given 74% while driving a Toyota Raize (215/55 R18) on mostly town for 30 easy going miles
Just change my continental uc6 with this falken, suprisingly its very comfort to handle road bump. The Noise still there but not worse like UC6. Other performace grip & handling cant say much because i only ride 50km from delers.
Helpful 2 - tyre reviewed on January 22, 2022
Want the best Performance summer tyre? Click here!

Before i change to ziex 914 ecorun, ive already use kumho PS31, Michelin PS3, bridgestone turanza t001 and Yokohama C Drive 2. I can conclude that this tyre still perform above my expectations. Very recommended for those who are looking a very good value and quality tyre. Only downside is braking performance and comfort.

Now I have chosen Federal Evoluzion ST-1 because of discounted price and nice sporty performance.
In the short-run I am very satisfied but I have yet to discover their long-run performance.
I wish they keep up with the Falkens...
Helpful 17 - tyre reviewed on September 12, 2019
Given 77% while driving a Citroën c3 Picasso 1.6 diesel (225/45 R17) on mostly country roads for 1,000 average miles
Great grip in both dry and wet conditions. I've driven in heavy rain and the tyres feels very secure with precise handling and great resistance to aquaplaning. No skipping nor sliding. I'm more of a relaxed driver so haven't stressed the tyres on a road track, but the tyres feels good and the car feels glued to the road. Steering has sharpened up, car feels more responsive to driver input compared to Michelin Energy. Noise levels are low, but the tyres are on the hard side so not so comfortable on poor roads/bad tamrac or gravel. These tyres are sporty touring tyres, perhaps too sporty for a MPV. I can't comment on wear, it's too early.
Helpful 6 - tyre reviewed on August 20, 2019
Given 86% while driving a Skoda Octavia estate (205/55 R16) on a combination of roads for 45,000 easy going miles
Had these tyres already fitted on my Octavia when I bought it. Had heard about Falken tyres but never used them before. I am an easy going driver, but these tyres held up very well. I have put about 60,000 kms on my car in 3 years and rotate the tyres front to back once a year. Tyres have around 2,5mm of tread left so looking to replace soon. Tyres have held up very well. Sidewalls are quite stiff. Do get a little noisey when tread is low. Have priced up a new set and are well worth the money.
Helpful 6 - tyre reviewed on April 7, 2019
Next Page >>