The Goodyear EfficientGrip is a Premium Touring Summer tyre designed to be fitted to Passenger Cars.

The EfficientGrip is ranked 116th of 135 Summer Premium Touring tyres. 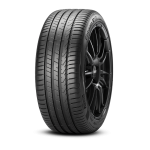 Questions and Answers for the Goodyear EfficientGrip

The Goodyear Efficient Grip is an asymmetric which means it can rotate in any direction. The tyre is marked with an "outside" and "inside" to show the tyre fitters how the tyre should be mounted on the wheel.

Given 64% while driving a Ford Fiesta mk7 (195/45 R16 V) on a combination of roads for 32,000 average miles
I fitted these tyres to my Ford Fiesta 1.4TDCi Titanium 3 years ago. My original reasoning for choosing these tyres was for their ability to increase your fuel economy, and claims over how quiet they were (66dB on this wheel size). The car's OEM tyres were Continental Sport Contact 2s which, to me, seemed like an odd choice given the 67bhp 1.4 diesel engine which is aimed at fuel economy, and has a â€˜leisurelyâ€™ (putting it diplomatically) 0-60mph time of 15 seconds!

The Good:
From the moment these tyres were fitted, I saw an instant increase in fuel economy. I noted a 5mpg gain on the first full tank of fuel. The car has continued to provide excellent fuel economy on these tyres over the past 3 years, easily averaging 65mpg, with 70+mpg on occasions in the summer months â€“ I never got close to this on the Sport Contacts.

Wear has also been fantastic. The tyres have now completed 32,000 miles (rotated at approx. 22,000), and there is still around 5mm tread on the front tyres, and 4mm on the rear. 40-45k miles is looking realistic.

Grip levels are completely fine with the car handling roundabouts in the wet at speed, and no major loss in feel when driving sensibly - although I am starting to notice a slight decrease in grip in wet conditions now.

The Bad:
When first fitted, they were relatively quiet, although not as quiet as I expected, but still acceptable. As they passed 20,000miles however, they started to get noisier and noisier. On rougher roads, there is now a lot of road roar/rumble. I noted some reviewers below state that they experienced a noise like a wheel bearing wearing out on these tyres, and I have also found this too, especially from the rear of the car â€“ almost like a humming sound at around 60mph.

The noise levels are becoming so bad, it is making me consider replacing them early. Comfort levels are therefore not fantastic in the long term.

Grip levels in snow are very low, even by summer tyre standards, and they are defeated by even the gentlest of slopes, but I get the feeling this is generally the case for all low rolling resistance tyres.

Overall:
These tyres have worked really well on the Fiesta, with fuel economy and wear being fantastic â€“ a definite 10 out of 10 on those front. Comfort though does deteriorate badly as the tyre wears. Also bear in mind this Fiesta engine develops a lowly 67bhp. The Efficient Grips are definitely at their best on â€˜normalâ€™ family cars with engine power approx.
Helpful 158 - tyre reviewed on September 27, 2016
Given 53% while driving a Toyota Corolla (205/60 R15) on a combination of roads for 50,000 average miles
The car is a magnet for small debris on the road that get stuck in the the grooves of the tyre. Plus it has an attraction towards punctures, getting them on a monthly basis every time form a new spot. Comfort and tyre noise have been significantly marginalised after 30000 km
Helpful 23 - tyre reviewed on October 23, 2018
Given 81% while driving a Peugeot 308 sw 1.6 hdi (225/45 R17 V) on mostly motorways for 22,000 average miles
Good and reliable tires, they did performed very well with almost 5* regarding comfort and low noise, but, it did noticeable lost grip, in narrow curves, wet and dry, after 20000 miles, even with lot of tread remaining.
Helpful 18 - tyre reviewed on February 12, 2018
Have you driven on the Goodyear EfficientGrip tyre?

Have YOU got experience with the Goodyear EfficientGrip? Help millions of other tyre buyers

Given 99% while driving a Ford Fiesta (195/45 R16) on a combination of roads for 100 average miles
I used to buy Yokohama. My local fitter suggested putting two new Goodyears on the front, as they were 10 years old and down to 3mm. £200 all inclusive. Seems expensive, but he said it was the best choice for me. So I went with his recommendation. Results: The steering seems just slightly less connected to the road, but not enough to matter. This is more than made up for by several factors: the ride is smoother, there is less road noise, the grip exceptional (bearing in mind the Yokos were down to 3mm). I had 6mm on my Yoko rears so he told me to keep them (OFC), but when I replace it will be Goodyear .... for many good years of motoring :D
Helpful 3 - tyre reviewed on May 7, 2022
Given 67% while driving a BMW 320D M Sport (225/45 R18) on a combination of roads for 10,000 easy going miles
These are currently fitted to my 2015 3 series 2.0 Msport. They are Runflats, so inherently noisy, but worse than the Continentals that the car came with. It appears these are made with a lighter construction and that totally figures. Since November (say 3 and a half months) I am in the process of buying the third tyre because of sidewall damage. The one I'm about to replace is the passenger side that was only replaced in November! DO NOT buy these tyres as they cannot withstand potholes. I never had a problem with the Continentals, so might go back to those.
Helpful 2 - tyre reviewed on February 23, 2022
Want your tyres to save you money on petrol? Click here!

Given 73% while driving a Jeep Grand Cherokee CRD (225/45 R17) on mostly country roads for 10,000 average miles
Very good feelings at the start. Very good handling with well directional tires. After 2 months, I felt vibrations. I came back to do the balancing, but no pellet had jumped. Unfortunately, the problem kept coming back. I changed my assembly center but it was the same. The geometry was also checked. The pros confirm a defect in the tire, but the online sales site (CentralPneus) tells me that they will not take back tires that have run! Of course, how to notice a defect before mounting them ??? GoddYear asks me to return to the seller, or ... return the tires to them at my expense (and after I roll on the rims?) The tires seem to deform while rolling !!!
Helpful 4 - tyre reviewed on January 2, 2022
Given 57% while driving a Volvo V40 1.5 T3 Geartronic (215/50 R17) on mostly motorways for 18,000 easy going miles
I bought 4 of these tyres to replace the worn out Pirelli Cinturato P6. Initial impressions are that these tyres indeed comfortable, grippy and returned good feedback. Priced quite well also and I thought I was getting good value for money which is why I took the plunge. After 20,000km the tyres were mostly worn but still slightly above the thread wear indicator. After 11 months, At 30,000km with the tyres well worn, I felt the tyres were wobbly on the highway and I especially dread driving in the wet because of the tendency to slip. That was the last straw and I subsequently changed to Michelin. I have always kept the pressure inflated to manufacture’s recommendation and used the car mostly on highways. Drove rather calmly and despite my best efforts, it still wear out faster than I expected. Longest lasting tyre I had was the factory fitted Turanza T001. Lasted 50,250km. These Goodyears dissapoint. I would not buy it again nor will I recommend it.
Helpful 1 - tyre reviewed on December 24, 2021
Given 56% while driving a Vauxhall Astra 1.9 cdti 150hp (225/45 R18) on a combination of roads for 800 average miles
Fitted 2 of these GOODYEAR Efficiency grip 225/40-18 to the front 5 weeks ago and have done about 800 miles on them. One tyre has already gone flat to the deck due to tiny hairline cracks in the sidewall.(yes its only done 800 miles). Low level 50 quid budget tyres "don't" even do that. Will never buy again, ever.
Helpful 2 - tyre reviewed on September 12, 2021
Given 32% while driving a Renault Renault Megane III Estate 1.5dci (225/45 R17) on a combination of roads for 500 average miles
extremly noise on my megane 3. I have only driven about 4000 km and concidering to switch them to another brand. Very loud roud hummung especialy on clear black tarmac . Not acceptable.
Helpful 4 - tyre reviewed on June 16, 2021
Given 60% while driving a Volvo v70 D5 (225/50 R16) on a combination of roads for 7,000 average miles
Had these fitted to the front wheels the handling was Good also the grip on the wet was excellent but after 7000 miles already down to 3mm tread on the tyres for the price on my car I would not use them again.
Helpful 3 - tyre reviewed on June 13, 2021
Given 37% while driving a Honda Civic FD1 1.8 i Vtec (205/60 R17) on mostly motorways for 2,500 average miles
Too noisy like wheel bearings gone bad. Poor steering response at corners.
Helpful 2 - tyre reviewed on May 15, 2021
Given 90% while driving a BMW 116d (205/55 R16 V) on mostly motorways for 42,000 average miles
These are the rft version, BMW strar mark. Replacing Michelin energy saving ( not bad on dry roads but weak on wet). One of the best option for rft tyres for bmw. Great breaking both dry or wet. Excelent handling ( maybe because of the hard SIDE walls). One of the best rolling resistence and confortable. Definetly Will buy again. Cheers from Portugal!
Helpful 3 - tyre reviewed on December 31, 2020
Given 43% while driving a Vauxhall Astra j 2.0 (225/45 R17 V) on mostly town for 6,000 average miles
My Astra Sri came with continental Tues which drive like a dream .. I chose Goodyear based on paper rating .. it was just a bad choice .. the handled like a squidgy ball and the road rumble made be want to write off the car .. I changed the fronts to continental sport contact today and instantly I love my car again .. never in my life am I buying Goodyear again 🤬
Helpful 7 - tyre reviewed on September 19, 2020
Given 100% while driving a BMW 116i (225/45 R17) on mostly town for 25,000 average miles
Runflats fitted to a BMW 116i (205/55R16) and couldnt be happier. They really pleasantly surprised me in the wet. No slip at all. Comfortable, quiet great tyres. Would definitely buy again and highly recommend to others.
Helpful 13 - tyre reviewed on May 9, 2020
Given 60% while driving a Volkswagen Transporter (255/45 R18) on a combination of roads for 5,000 average miles
Bought 4 of these tyres in late October last year. I've used them in most weather conditions and they worked fine, nothing special at all just sound tyres with decent grip. It's now late March and I have done about 5,000 miles on these tyres and they have worn quite badly. I've had 20,000 miles out of a set of tyres before now. Sadly I don't think I'll even get another 5,000 out of these. I've rated the wear at 3 because it may very well be that they're not ideal for my type of vehicle, but I would still expect far better wear from higher end tyres (I paid £120 plus tax per tyre including fitting & tracking). The tyres had decent amounts of tread when new and were economic and comfortable for a while. Now that they are wearing lower they are becoming noiser, hence the lower comfort rating. I personally wouldn't buy these tyres again and wouldn't recommend them to anybody thinking of having them fitted to a Van, Pickup or larger vehicle.
Helpful 3 - tyre reviewed on March 26, 2020
Next Page >>