The Toyo Proxes Sport is a Premium Touring Summer tyre designed to be fitted to Passenger Cars. 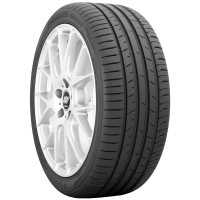 Nokian iLine - 88%
Sorry, we don't currently have any questions and answers for the Toyo Proxes Sport. Why not submit a question to our tyre experts using the form below!

Wet grip is as good as Michelin Sport 4S ... Road feedback is negligibly less however the comfort is significantly better. Can't tell how the wear will go as I am currently at 1200 miles, judging by now, they can easily go for over 10 000 miles.
Helpful 62 - tyre reviewed on January 10, 2018
Given 76% while driving a Honda Civic Type R (225/40 R18 W) on a combination of roads for 2,000 spirited miles
You can always tell fake reviews like the one below by the "BMW M240i" driver, they completely go against general feedback and come across as extremely negative. Well I'm glad they made it so easy for others to identify.

Here's my review. I like the Proxes Sport as a cheaper tyre that isn't the best in all categories, but performs well enough to earn its Sport name. I do both longer drives and quick blasts too, and after almost 2000 miles I feel they are a good tyre for both... if you can put up with the less supple nature of them. They aren't comfort tyres and that's why I marked them lower in that category. Any tyre that is better feedback will sacrifice comfort. Road noise however is excellent for the money, I'd say they are quieter than the Proxes T1s I had previously. Grip is fine in dry and wet, with its wet performance an improvement on the old Proxes.

I'd definitely buy them again assuming there weren't any better options out there for the money. 7.5/10.
Helpful 61 - tyre reviewed on October 6, 2018
Have you driven on the Toyo Proxes Sport tyre?

Have YOU got experience with the Toyo Proxes Sport? Help millions of other tyre buyers

Given 63% while driving a BMW 325 (225/45 R17) on track for 0 spirited miles
I have an E36 I drove on the front tires, there is no doubt that the tire is good in the summer when outside is over 25 degrees and dry to drift but when the road is wet do not recommend
Helpful 3 - tyre reviewed on March 13, 2022
Given 54% while driving a BMW M235i (255/30 R19) on mostly country roads for 7,000 average miles
These tyres were fantastic for the first 3000-4000 miles, however they very quickly started to deteriorate. The performance started to lack after the initial 3000-4000 and I've recently checked the wear at 7000 miles and they are pretty much done, there is less than 3mm left on the tyre which I was shocked at. Definitely will not be buying these again due to the awful wear for the price of the tyre.
Helpful 2 - tyre reviewed on July 13, 2021
Want the best Performance summer tyre? Click here!

Given 84% while driving a MINI Cooper S (205/45 R17 V) on mostly country roads for 8,000 spirited miles
These tyres are very different from anything Iâ€™ve had put on before... The dry grip is good but not amazing and is VERY predictable, no sudden losses of traction, itâ€™s very progressive. Handling is good but because of the slightly thinner side wall, you can feel the car moving on the tyres slightly, it doesnâ€™t change how well it sticks to the road though! Wet grip is absolutely astounding and thatâ€™s why I bought these. Round corners, thereâ€™s nearly as much grip in the wet as there is in the dry!! Straight line grip isnâ€™t a strong point with these tyres in general, but even in the wet its nearly as good as the dry grip! In wet weather I havenâ€™t found a grippier tyre, I am yet to find a tyre I can go round hairpin turns at 40+ mph with terential rain, haha! Despite the positives of these tyres, they wear out quickly, the rubber is very soft and I would probably say thatâ€™s why they are so good, but my set lasted me 8000 miles on the front of my R56 Mini Cooper S. I did loads of burnouts and I hooned it about on a daily basis so Iâ€™m not the best example of realistic wear on these tyres, but I wouldnâ€™t be surprised to see them last 20â€™000+ miles if used properly
Helpful 5 - tyre reviewed on January 31, 2021
Given 16% while driving a Vauxhall Astra GTC (235/50 R18 V) on a combination of roads for 8,000 average miles
All I have to say is do not buy these tyres. They lasted 3 months. 3 MONTHS! 8000 miles ! Mostly on motorways. It’s absolutely shocking how tyres likes these are even allowed to be sold as its not safe at all. They were okay for the first month and a half, grip was good enough, then started slipping in the wet, then in the dry even. 3 months and there is literally no thread left.
Helpful 27 - tyre reviewed on November 22, 2020
Given 94% while driving a Peugeot RCZ 2.0 HDi GT (235/40 R19 W) on a combination of roads for 1,000 spirited miles
I fitted a pair to the front of my Peugeot ZCZ HDi at the end of February just before my MOT was due. The improvement over the Avon’s that were on there was amazing. The biggest improvement though was to the ride quality. It no longer crashed over small potholes & ridges in the road. Well not at the front anyway. Because of lockdown, I didn’t rush to change the worn rears, as per MOT advisory. However, yesterday morning I had a new pair fitted to the rear. Total transformation to the ride quality, yet it still maintained its grip. Even brand new on damp roads. It can only get better. Highly recommended tyre!
Helpful 2 - tyre reviewed on June 19, 2020
Given 71% while driving a BMW 330d M Sport (225/40 R18 W) on a combination of roads for 20,000 spirited miles
I have drove a lot last year and in many different conditions with these tyres. On daily commutes, on the motorway, on the track, in drag racing events and of course quite a bit of spirited driving.
Initially I liked my set of Proxes Sport as they were very affordable. The amount of grip was very acceptable, although the tyres felt quite soft at longer turns and the steering was not as precise as I wanted it to be.
In the wet I had no issues with their performance whatsoever (although I never tracked them in the wet).
Regarding wear. I expected to get a bit more out of them, but after more than 20k mi in just 1 summer season, the rears are totally destroyed and need replacing, while the fronts are at about 50%.
Overall, I think it is a good tyre for a lower budget.
Helpful 13 - tyre reviewed on February 3, 2020
Given 59% while driving a Mazda 3 Series (205/50 R17 W) on a combination of roads for 12 average miles
I've used these Toyo Proxes Sport for 12,000 miles.
Overall, it was a pretty average tyre. Its considered as a "sport" tyre, so the sidewalls are firmer, however, this also contributes to a less comfy ride. Could jump on uneven surfaces instead of absorbing them. Very noisy as well.
On dry roads, traction is less than on wet roads, interestingly, but still okay. Tyres can wander on higher speeds, they don't "stick like glue" like the previous Goodyear EGP.
Wear wise, front still had 3mm left, rear still had 5mm left after 12,000 miles.
Seemed more prone to nail punctures as it aged.
Now have Falken ZE310 tyres fitted, far superior in every aspect, compared to Toyos when new.
Could suit some cars, but wouldn't recommend on a Mazda 3.
Helpful 7 - tyre reviewed on May 2, 2019
Given 33% while driving a BMW M240i (245/35 R18 W) on a combination of roads for 100 spirited miles
I drive a BMW M240i with Michelin Pilot Super Sport. Since I installed a limited slip differential (for improved grip and handling) I needed a set of less expensive tyres to play around a little (make drifts), so I bought a set of these just for the rear.

What I expected was medium quality tyres with less grip, especcially on wet, where most cheaper tyres show their difference with the premium types. But the difference was way bigger than expected!

The car feels unbelievable sloppy in the back. Even when I drive just 120km/h on the highway it is very sensible to tracks in the road and I have to steer all the time to make the car go straight. When I accellerate really hard to 200km/h the back feels like all my bushings are made of gum instead of hard rubber. It scares me to drive it fast.

I am really suprised how bad these tyres are. They have some okay grip, also in wet, but the stability is really bad. I would not have believed new Toyo tyres can make the car feel this much worse.

With my old Michelins back on all the problems were gone. By the way, I also tried a set of supercheap Chinese tyres and the feeling was somewhat alike these Toyo's. So if you want your car to handle in a way it gives you confidence, don't go for these Toyo's. I even doubt I would fit them on my wifes car who drives very slow all the time. Because it really pulls down the quality of the ride. Imagine steering all the time on the highway, instead of going perfectly straight with 1 finger at the wheel.

And for the record, I choose the exact same size as the Michelins.
Helpful 18 - tyre reviewed on September 13, 2018
Given 51% while driving a Volkswagen Mk7 Golf R (225/45 R17) on a combination of roads for 1,000 average miles
These tyres are awful. I removed them after approx 1000 and have replaced them with some delightful goodyear eagle f1s.
The toyos proxes sport were very noisy especially at low speed maneuvering speeds. They have very hard side walls meaning they are very uncomfortable. They also are very narrow compared to the goodyears of the same size offering no alloy protection.
Never again and a waste if money.
Helpful 35 - tyre reviewed on March 24, 2018
Next Page >>