The Michelin Alpin A4 is a High Performance Winter tyre designed to be fitted to Passenger Cars. 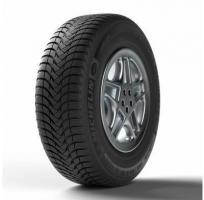 The Alpin A4 is ranked 1st of 55 Winter High Performance tyres.

Nokian WR D3 - 87%
Sorry, we don't currently have any questions and answers for the Michelin Alpin A4. Why not submit a question to our tyre experts using the form below!

Given 79% while driving a Mazda 6 (205/55 R16 V) on mostly country roads for 5,000 average miles
Given that the car is used for commutes, most of the time it's less than 5 degrees, and so these have been fitted from November to the start of May (Climate change, eh?)
Pulling out of junctions with front wheel drive is the biggest test of tyres, and these cling on just great, although I've detected a slight drop off from new. Maybe I'm being more cocky, though.
Day to day, they're surefooted and accurate, and the tread is holding up well after two winters. No detectable wear, which is what you'd hope for.
I think they've been a good purchase and although I've not had much chance to drive in the snow, light coverings and frosty roads are easily managed. I rate tyres as a major safety device and that's why I fit winter tyres to the family car.
Helpful 70 - tyre reviewed on April 12, 2016
Given 86% while driving a Toyota Corolla (175/65 R14 T) on a combination of roads for 2,500 average miles
Excellent tires,like all Michelins...
Helpful 24 - tyre reviewed on January 8, 2015
Given 93% while driving a Honda Jazz (185/55 R15 H) on mostly country roads for 2,500 average miles
A real boost to bad weather driving. Wet grip is exceptional; emergency stopping from 60+mph is excellent; no fuss, no skidding, no drama. Really inspires confidence. On snow and ice grip and traction is noticeably enhanced; just remember to also keep revs low and (if necessary) gear selection high. Dry grip seems the same as my summer tyres; however road noise is a little greater and my MPG seems to have dropped by about 4mpg. Very happy to trade these small issues for the security of increased grip in adverse weather. Fitted these 2 months ago and the moulding pips on the tyres edges are still present on all tyres after 2500 miles, so confident that they will wear well (as all Michelins do).
Helpful 9 - tyre reviewed on January 26, 2017
Have you driven on the Michelin Alpin A4 tyre?

Have YOU got experience with the Michelin Alpin A4? Help millions of other tyre buyers

Review your Michelin Alpin A4 >

Given 79% while driving a BMW 330d (225/50 R17 H) on a combination of roads for 15,000 spirited miles
These tyres never feel overwhelmed - great in the wet, good in dry conditions and the occasional snow. Great feedback and precision (for a winter tyre). Only on black ice the grip fades They are also silent and comfortable.
Helpful 4 - tyre reviewed on December 14, 2020
Given 93% while driving a Opel insignia (215/50 R17 V) on mostly town for 15,000 spirited miles
I've used these tyres for 4 winters for 15000 Miles (25000 Km) in Turkey. The best thing about them is the confidence when you're climbing uphill in the snow. The worst thing was the road feedback and numbness on steering.
Tyres were very comfortable and durable against big pot holes.
Overall it was a very good tyre and I would buy them again. (I've sold the car but the tyres had at least 3500 miles left)
Helpful 8 - tyre reviewed on May 3, 2019
Want the best Performance summer tyre? Click here!

Given 87% while driving a SEAT 184hp TDI Leon (215/45 R17 W) on mostly country roads for 3,000 spirited miles
Bought these part worn with 6mm tread left. They have been fantastic in the snow and ice in 2019. Good in the wet (better than my continental summer types) and mostly fine in the dry. I live in the peak district in Derbyshire, so there are many opportunities for going quickly on national speed limit roads. Both braking and turning have been excellent in the snow, to the point where i was able to get up hills other 4x4's and smaller vehicles could not.
The only negative i'd say, is that if you are driving with gusto, overcrest hills are a nightmare and the sidewalls fold in. That said, my summer tyres are much lower profile and handle perfectly, so the winter tyres didnt stand a chance. My driving style is 90% economy to work and back, 10% nutter on the country lanes at the weekend. I must say though, this is the only set of winter tyres i have had on the front.
Helpful 3 - tyre reviewed on February 4, 2019
Given 74% while driving a Audi A4 2.0 TDI 140 SLine (205/65 R15) on mostly country roads for 35,000 average miles
I found these tyres very helpful on hard packed ice during two extremely cold and extreme winters in Ireland just a couple of seasons ago. Was able to travel country roads, slowly, and with great care, that I could not travel with my other car using normal tyres. The only negative I found with these tyres was, that I attended a race meeting in Ireland, had to park on a solid grassy field, where the ground was relatively solid, but the grass was wet, and the car would not travel on that surface at all, or take off from stationery, using Alpine A4 tyres. Car type Audi A4.
Helpful 4 - tyre reviewed on October 23, 2014
Given 90% while driving a Renault Megane (195/65 R15) on a combination of roads for 10,000 average miles
Excellent tyre for wet and snowy roads. Even on mountain hills in ski resorts, tyre proved its speciffications. Very reliable.
Helpful 0 - tyre reviewed on March 23, 2014
Given 100% while driving a Honda Stream (225/45 R17) on a combination of roads for 0 average miles
great tire
Helpful 0 - tyre reviewed on January 27, 2014
Given 91% while driving a BMW E93 330i (225/45 R17 H) on mostly country roads for 5,000 average miles
Fitted these as the BMW 325 is a typical high power rear-wheel drive BMW- known for being a handful in the snow. Pleased to say it transforms the car and makes for a reassuring drive even when it Snows. I usually fit around November and swap back to summer tyres in March. I will be able to get 4 seasons out of them given current wear rate.
Helpful 0 - tyre reviewed on December 11, 2013
Given 70% while driving a Opel Astra G (225/45 R17) on a combination of roads for 12,000 average miles
these tires are a let down, past 6000 miles traveled, I have noticed a sharp decline in performance especially in the snow, where they should serve more. I will change tire brand
Helpful 0 - tyre reviewed on November 25, 2013
Given 93% while driving a BMW E39 5 series (205/65 R15 T) on a combination of roads for 3,000 average miles
Had them on my 2.5d chipped e39 and they were amazing. Just what you expect from winter tyres.
Helpful 0 - tyre reviewed on April 22, 2013
Given 86% while driving a SEAT Ibiza 1.6cr TDi (215/45 R16) on a combination of roads for 5,000 spirited miles
Incredible on snow and ice. They sap confidence in the rain though, primarily because they numb the brake pedal and you don't get much feel. Very quiet and refined but compared to summer tyres feel a bit like driving through treacle if it's dry and the air temp is more than 10 degrees c. Perfect for winter though - accelerate steer and brake on snow almost like its not there. Fit them in November and take them off in March, but don't run them in the summer.
Helpful 1 - tyre reviewed on March 17, 2013
Given 100% while driving a Volvo S80 D5 (205/60 R16 H) on a combination of roads for 3,000 average miles
Well done. Before I had conti ts830. Michelin is better than conti on dry road. Every feel is the same. Good Tyre
Helpful 0 - tyre reviewed on March 3, 2013
Given 93% while driving a Audi A4 2.0 TDI 170 Quattro (225/45 R18) on mostly country roads for 1,000 spirited miles
Bought for winter and arrived the day before a massive dump of snow which lasted a week. As we live in rural Aberdeenshire I got to experience these on deep snow for my daily commute of 25 miles into Aberdeen. The grip and traction blew me away when compared to a summer tyre and my confidence in the Quattro was reasured. Not driven enough to comment on wear, but performance has left me praying for more cold weather.
Helpful 1 - tyre reviewed on January 4, 2013
Next Page >>