The Vredestein Wintrac Pro answers the growing market demands in the 17-inch and ultra-high-performance segment. The new winter tyre makes no concessions in terms of performance, offering maximum grip while cornering, short stopping distances on wet roads and great handling, even at high speeds. The Wintrac Pro is available in speed rating Y, making it appropriate for use at speeds of up to 300 km/h (186mph) for a large number of sizes. The tyre merges an attractive design with advanced technology. 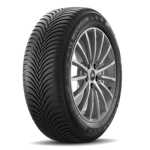 Michelin Pilot Alpin 5 - 89%
Sorry, we don't currently have any questions and answers for the Vredestein Wintrac Pro. Why not submit a question to our tyre experts using the form below!

Given 85% while driving a BMW M240i (225/40 R18 W) on a combination of roads for 200 average miles
I've had several types / makes of winter tyres fitted to different cars over the years (Mini Cooper S, BMW X5's), although this is an initial review and we haven't had any severe weather yet these tyres seem excellent and better that I have had in the past (plus this car is more powerful (340bhp) and rear wheel drive...). We've only driven the car in temperatures at zero degC and above but we've had some horrendous weather with heavy rain and high winds, driving with these tyres really in both small country roads and main dual carriageways with aquaplane conditions these have been sure footed, I have to commend them. I hope that come snow and the real harsh weather that will come shortly they will continue to impress.

Helpful 76 - tyre reviewed on November 30, 2018
Given 94% while driving a Audi S5 (255/40 R19 V) on a combination of roads for 5,000 spirited miles
Great winter tyres, highly recommend. Amazing traction in the Scottish winter and snow. Good handling balance at the limit and provides plenty of feedback of the road surface. Corners and grips well in temperatures under 0 degrees Celsius. A must buy for any performance vehicle if looking to drive spiritedly in the colder months. Driving a stage 2 Audi S5 with 485 Bhp, a good tyre is a must even with Quattro to put the power down when the road is slippery, wet and cold. The tyre is vary predictable at the limit when driving on an dry road and provides confidence when braking. Would buy again.
Helpful 62 - tyre reviewed on March 12, 2021
Given 100% while driving a Jaguar Jaguar XE (225/45 R18) on a combination of roads for 1,000 average miles
Bought these tyres on the strength of Autobild UHP winter tyre test 2018. Had the chance to drive through snow , slush and ice on saturday here in Scotland . Last winter I had the misfortune to experience a few scary moments when my UHP summer tyres lost traction where I skidded and slid all over the place in conditions not nearly severe as saturday past. These tyres in one word are phenomenal . I never lost traction once , I felt so safe and confident throughout my whole journey.

My wife has a mini cooper with UHP winter tyres , now on their second season. Her tyres are good but not in the same class as the Wintrac pro , they have a sluggish steering response and mushy feel at temps above 10c. The Wintrac pro at 9c last week felt very planted on dry roads , I am really quite amazed at how they've managed to achieve this .

My experience with premium winter tyres in the past have never been this good. All I can say is I'm so glad that these tyres are tested to the limit by those who know how and we all learn so much before making an expensive mistake. If you review this and decide to buy you will Not be disappointed and before you ask , I'm not affiliated with Vredestein in any shape or form . Good luck with your choice .

Helpful 31 - tyre reviewed on December 17, 2018
Have you driven on the Vredestein Wintrac Pro tyre?

Have YOU got experience with the Vredestein Wintrac Pro? Help millions of other tyre buyers